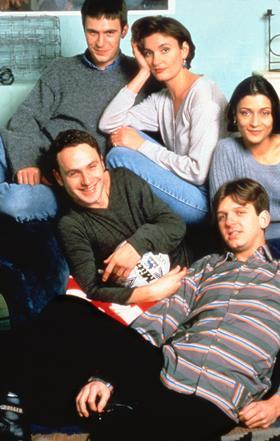 As a 14-year-old I was entranced by This Life, the drama about a group of 20-somethings living together after coming out of law school.

Admittedly, the nuances of the legal profession were secondary to me: the drugs and swearing were more of a draw to my teenage self living a distant existence in lifeless seaside town. Now, having watched the series again with a little legal knowledge, it adds a whole new texture.

For those too young to recall, the series was set in legal London in the mid-1990s, featuring barristers Miles and Anna, and solicitors Milly, Warren and Egg. Only a dozen or so episodes were made, but the show remains a cult classic.

The programme is often held up as being a staging point for the Cool Britannia movement of the time, and a snapshot of life during this period. Certainly it is of its time, with social media a decade away and pubs still smoke-filled.

But in terms of issues affecting the legal profession, it is remarkable just how little seems to have actually changed since those halcyon days of Massive Attack and Eric Cantona. (There are exceptions - you certainly won’t see many junior lawyers renting a Georgian house in Farringdon anymore).

The challenges, pressures and temptations remain the same, and many will be familiar to lawyers making their way in the 21st century profession.

Criminal barristers barely make ends meet, trainee solicitors are stuck in photocopier purgatory desperate for some real cases, and lawyers wrestle with their conscience on whether to do worthy work or take the corporate shilling.

There are difficult clients, workplace romances, boozy lunches and working into the small hours. The lawyers struggle with their mental health, watching their caseloads mount and feeling suffocated by their surroundings and daunting deadlines. Drugs and alcohol are a constant feature and often a crutch to lean on when things get too much.

Partners and heads of chambers are rather crudely portrayed as arrogant and aloof. Some are sexually predatory and there is a sense that career advancement is sometimes dependent on your willingness to accept such advances.

If nothing else, it’s brilliant for spotting legal landmarks around London and for surveying where the skyline has transformed the capital.

Whether you remember it or not, I’d implore you watch again. If only for the soundtrack alone.

It is tempting always to think of your own era as the defining one, believing that previous generations have never had it so good/bad. Certainly, there are huge pressures facing young lawyers today, but This Life shows they were pretty similar 20 years ago. It’s just a shame today’s generation don’t have anything as good as Teardrop to come down from a tough day at the office.