'Women did not become barristers'

I had a very secluded childhood. I was born and brought up in Kew Gardens. My parents were both born in 1889 and I was the fourth child - so they were both in their 40s when I was born. It was a very kindly but strict family, where I was expected to do what my parents told me. I can remember never querying my parents. 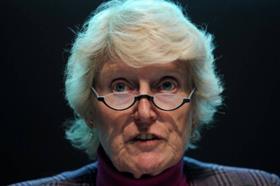 The idea that I would become a barrister was extraordinary. Women did not become barristers. My brother who was ten years older than me, who was a barrister, was horrified when I wanted to be one, but my father was extraordinarily modern and said if my brothers could do it so indeed could I if I was clever enough.

I was scared stiff. I had a rather high voice and I can remember my father giving me excellent advice - two things. One was to work to lower my voice because on the whole judges wouldn’t like it if had a high voice and the other was to speak more slowly because I used to speak, like many young people, extremely fast.

I was in very nice chambers, I was made welcome there, but solicitors didn’t want me and I vividly recall I’d been at the Bar for four or five years when there was an undefended divorce in Cambridge which was three minutes in court. The clerks were very sympathetic to me, I was very lucky. One clerk said to the solicitor (I happened to be in the clerk’s room): 'I’ve got Miss Havers here. She is five years called, very experienced'. 'I don’t really want a woman' said the solicitor at the other end. 'Well, you know, she’s the judge’s daughter'. 'Well can’t you find me a man even if he’s only a pupil?' So they sent a pupil to Cambridge.

Then there was some particularly esoteric work in chambers, representing road hauliers and owners of big coach companies, and I got in to that. It was enquiry work and oddly enough, although road hauliers are the most conservative group you could imagine, I did actually represent them and it worked.

I was not really thinking about the future. As soon as I married three years after I got to the Bar, there I was with a child, rather unexpectedly early - which was wonderful actually because I might have waited much too long - and then I had another child two and a half years later. Just managing a career, managing a family, was enough for me on a day-to-day basis. Then we had our third child five years after that. What’s interesting was my father getting increasingly worried that I was actually, as he said, neglecting the family with my career.

So when I got asked by the president of the family division, one of my predecessors, if I would become a registrar at Somerset House, I said I’d like to think about it because I was only 36 at the time. I went to my father and I said 'what do I do?'. He said 'you must take it'. Then he said 'you won’t get promotion, you won’t get any of the things you might want to do but you absolutely owe it to your family to take this job. It will be an absolutely safe job, you have set hours. You’re in one place'. When I told my daughter - who was 11 when I became a registrar - she said 'does that mean I’ll know where you are Mum?' and I suddenly realised that my father was absolutely right.

The really important leap for me that started my career upwards, was to be promoted from Somerset House as a registrar to the High Court. That had never happened before and it hasn’t happened since and that was what set me on the path.

I was in Devon at our house and the phone suddenly went and it was the permanent secretary of the lord chancellor. The lord chancellor wanted to speak to me. Hailsham came on: 'Is it you Elizabeth?'. He happened to know me quite well. 'I want you to become one of my High Court judges.' I nearly said, 'you must be joking' but I said 'yes, lord chancellor'.

Hailsham went on, 'I want you to understand how I appointed you because there may be some criticism. They came to me and said "we want to appoint a woman from the Somerset House to be a High Court judge. She’s very well supported by the president of the family division and other judges. She’s Elizabeth Havers."' 'Oh for goodness sake', he replied, and asked if I could do it because my brother was recently attorney general. They replied 'well it’s clear you didn’t know who she was, you appointed her without knowing, we think you can go ahead'. He told me this story because, he said, 'you’ll get criticism in the press and I do want you to know that I appointed you on merit and not because I knew who you were'.

In a sense I didn’t expect to get to the Court of Appeal but I wasn’t all that surprised. I think it was a reward for the Cleveland Child Abuse Inquiry Report and it was a very interesting experience because I think there were 36 members of the Court of Appeal and I was the only woman. I got quite criticised by my female colleagues on the bench who hadn’t yet got preferment that I wasn’t making more of a point of being the first woman. I took the opposite view that I was there. It was my presence that mattered and it was important that I didn’t rock the boat. They just got used to me and every now and again when they really went too far in meetings, I said 'come off it chaps' and they realised that I was there.

I retired in 2005 as president of the Family Division and in 2006 I was invited to apply. It was actually Lord Donaldson who filled out the form and sent it to me and told me to sign it. It had never crossed my mind that I would become a member of the House of Lords. I wouldn’t have dreamt of applying. I have never applied for anything, it’s always come, and so I did what he said. I was interviewed and the only question I was asked was: 'If you get it, will you turn up?'. 'Of course I’ll turn up.'

I have quite a lot of commitment. I felt the higher up the ladder I went with the family cases that I really had a commitment to do the best I could for families and that included when I was president, working with the government of the day to improve the family law and to try and persuade the government from not putting in some extremely bad suggestions. I’ve carried on with adoption and family law since I’ve been here in the Lords. So energy, commitment, challenges. If I’m asked to do something, the answer is yes, well I better do it.

Baroness Butler-Sloss is a former lord justice of appeal. This is an edited version of her interview for the First 100 Years project which charts the journey of women in law since 1919