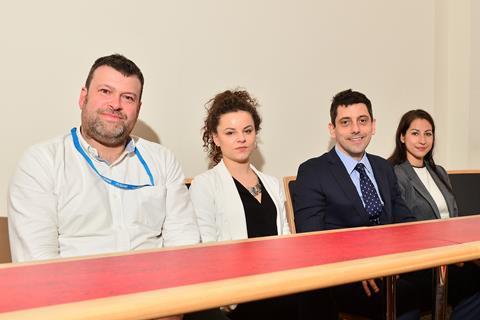 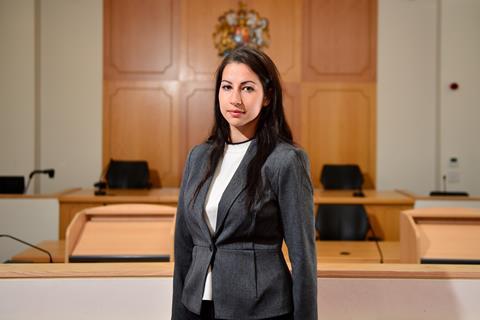 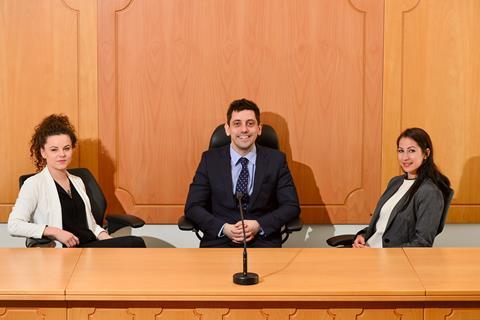 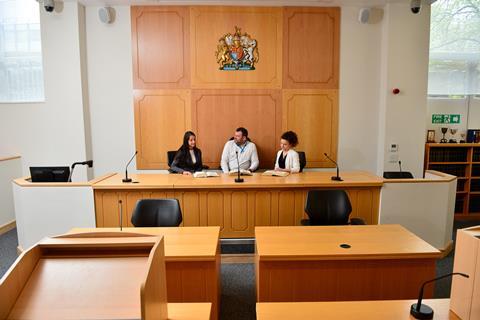 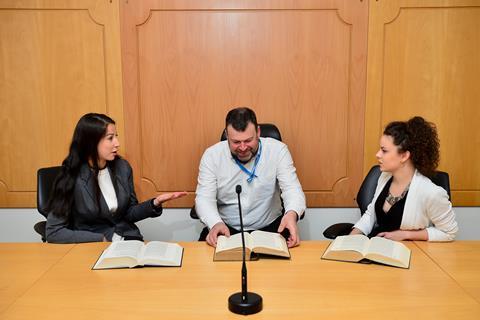 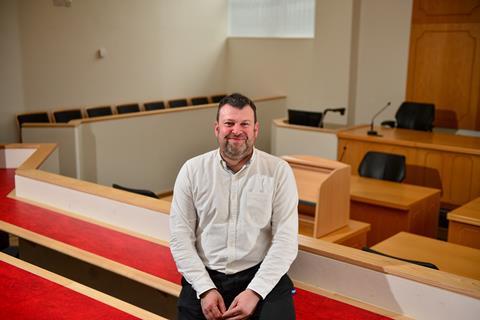 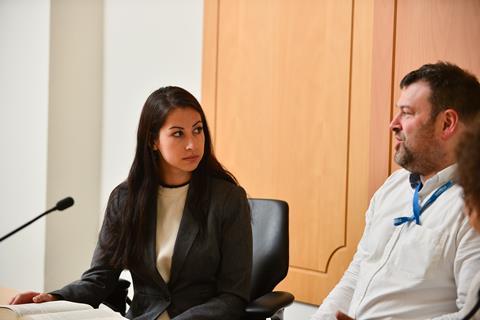 An innovative learning hub at Coventry University puts students in the driving seat to boost their employability.

Imagine that the traditional ‘talk and chalk’ model of law school tuition is dead. In its place, there are robots through which UK law students interact with their counterparts in Asia, Africa and Australia. There are no more role plays. Instead, students advocate for real clients in real courts before real judges. Envision, too, that work experience is no longer confined to university breaks, but happens during term time as well. Picture, also, young aspiring solicitors being mentored by magic circle lawyers.

This is not some utopian vision of how legal education might one day evolve. It is already a reality at Coventry University (CU) in the West Midlands.

Much of CU’s innovative flair revolves around its law clinic programme. Now in its sixth year and fifth phase, the programme has thrived in part thanks to its partnership with the Central England Law Centre (CELC), a charity made up of Coventry Law Centre and Birmingham Community Law Centre. This is the UK’s biggest law centre, employing 52 staff, 11 of whom are solicitors. One member of staff, a CU law graduate, is currently completing a training contract at the Coventry Law Centre. Another graduate is employed there as a paralegal.

The partnership dates back to 2012, when Coventry law school’s acting associate head (enterprise and commercial) Alan East decided to improve the way clinical legal education was delivered by ‘creating a hub of clinical legal activity to provide students with a diverse range of legal experiences’. This programme of ‘experiential learning’, or learning through experience, revolves around the work of CECL and has now grown through five phases to embrace several areas of law.

East states: ‘Much of our value to the community is in ameliorating the catastrophic impact of the Legal Aid, Sentencing and Punishment of Offenders Act 2012 (LASPO). This piece of legislation, by denying legal aid to often vulnerable people, radically reduces their access to justice.’ He stresses: ‘But we don’t want to be seen as an alternative to LASPO. We see ourselves more as campaigners for legal aid becoming widely available again.’

In the first year of the partnership, 2012, a small group of students began phase one of the programme by piloting a welfare benefit clinic. This was supervised by Janet Gurney, the law centre’s welfare benefit specialist. Students were given intensive training before they began to advise clients and support them in their dealings with the Department for Work and Pensions.

‘The number one benefit of this training model,’ says East, ‘is that students are put in the driving seat of their own learning. They get to do law in practice rather than just reading about it. They are allowed to practise legal skills such as communication, interviewing, negotiation and case management. This is all great for their future employability.’

The second phase of the programme saw the launch of an employment law clinic, with 12 students giving members of the public advice on Wednesday afternoons. They are supervised by solicitor Katherine King, who lectures on employment law at the university. East comments: ‘Each student can see up to nine clients every week. There are 12 students, so that is around 108 clients weekly. That is excellent community engagement.’

Genevieve Kurankye, one of the students in the first employment clinic, is now employed at CECL. ‘That’s testimony that our students become highly employable when they participate in the clinics,’ observes East.

Phases three and four were characterised by the law school extending its reach, nationally and internationally, to enhance – in East’s words - its ‘clinical legal education journey’. In 2016, it partnered with magic circle firm Allen & Overy, which keeps a team of employment specialists on call during the employment clinics to advise participating students. The following year, it opened a South West University of Political Science and Law (SWUPL) clinic. SWUPL is based in Chongqing Shi, China. The law school has also established close ties with the universities of Stellenbosch in South Africa and Newcastle in Australia. The students network remotely through robots – these look like a computer screen attached to a chest-high pole on wheels.

‘Phase five, the advocacy clinic, is the jewel in the crown of the whole programme,’ enthuses East. ‘It’s what earned us the right to label ourselves a modern law school with a social conscience.’ The advocacy clinic, he explains,

was launched in November 2017 but, after recruiting suitable students, only began to function in January 2018. The clinic is remarkable, perhaps unique, in that the students are allowed to stand up in court and represent their clients before a judge.

‘This is very rare indeed,’ East says, before outlining progress to date. ‘We have handled 24 cases, of which 19 were heard at tribunal. Three were refused, two were adjourned and 14 appeals were allowed. We recovered £24,363 in arrears, which averages out at around £1,740 per client.

Kristyna Petrosjanova is the first advocacy clinic student to have represented a client in a real court, the Social Entitlement Chamber in Coventry. This chamber is one of seven chambers that make up the First-tier Tribunal, which was created in 2008 to rationalise the tribunal system. The First-tier Tribunal has since taken on the functions of twenty previously existing tribunals. The bench for Petrosjanova’s case comprised a judge and a medical practitioner. Her supervisor was not permitted to sit beside her, but observed from the public gallery.

‘I was more excited than scared,’ she confides, ‘until I sat down in the courtroom and the nerves caught up with me. But I told myself: OK, I’m going to have to speak now, keep calm. The judge didn’t seem to look down on me and so the nerves quickly dropped away.’

Petrosjanova’s client had been denied benefits by another judge more than 18 months previously. Petrosjanova’s role was to help her appeal that decision. To that end, she worked to identify the grounds for the appeal and briefed her client on the sort of questions she was likely to be asked during the hearing. She also tried to spot and remedy any holes in her client’s case.

‘My client wasn’t too worried and stressed out, which helped,’ she says. ‘The medical practitioner considered her circumstances and recommended reinstating her benefits. The judge agreed and we had won the case. The client was awarded all the money owed to her and the decision was frozen for two years so it couldn’t be retried immediately.’

Although this was Petrosjanova’s first appearance in a court of law, like many of her peers at CU, she has been intent on getting as much work experience as possible. She has had placements at four law firms and also at the Crown Prosecution Service.

CU student Marlena Rozek, another intern at CECL’s advocacy clinic, represented her first client in the First-tier Tribunal and won the case two days prior to the Gazette interviewing her. She explains: ‘I want to work within criminal law and so advocacy, questioning and pleading are all essential skills. The clinic gives me the opportunity to practise them in a real situation – real court, real client, real judge.’

The training provided by the university and law centre was ‘quick, concise and to the point,’ she comments, but she was still nervous about the whole procedure. ‘I knew I had a strong case, but when should I stand up or sit down? How do I avoid doing something silly? If you’re nervous, your client is nervous, too. And it’s your client’s life that is being ruled upon. You have to keep relaxed for your client’s benefit.’

Marlena’s previous work experience includes a stint at the CPS in Birmingham and a ‘mini-pupillage’ with a criminal law QC. She also worked with a Polish and English trained lawyer dealing with extradition orders, an area of law that interests her and into which she may enter.

What does the future hold for CU’s legal clinics? East replies: ‘We are thinking about opening a domestic violence helpline. And homelessness is a great problem in the West Midlands; we plan to become more proactive in helping people before they become homeless. We want to send more students into schools to deliver street law – what our Newcastle University friends in Australia call “beach law”.

‘We intend to organise more online international learning projects, not only with our friends in China, Africa and Australia, but also with new networks of contacts overseas. Our grand plan, on a domestic level, is to develop right across the West Midlands, linking up with other law centres and university law schools. It’s all going to be hard work, but also good fun.’