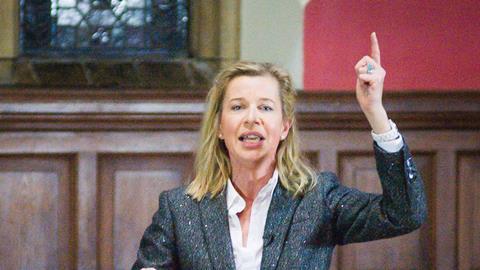 Tabloid ‘rent-a-gob’ columnist Katie Hopkins has been ordered to pay £24,000 in damages for libellous tweets in one of the first cases to define the new ‘serious harm’ threshold in defamation law.

Ruling in Jack Monroe v Katie Hopkins today, Mr Justice Warby said that Twitter comments made by Hopkins about food writer Jack Monroe were defamatory and met the requirements of the 2013 Defamation Act.

Warby ruled that the serious harm requirement is satisfied, ‘on the straightforward basis that the tweets complained of have a tendency to cause harm to this claimant’s reputation in the eyes of third parties, of a kind that would be serious for her’.

Warby is the presiding judge of the new Media and Communication List in the High Court and his interpretation of the serious harm test will be a blow to publishers hoping the 2013 act would make defamation actions more difficult to bring.

Monroe had complained that two tweets sent by the defendant on 18 May 2015 accused her of vandalising a war memorial or of approving or condoning such behaviour. At the time Hopkins wrote for the Sun newspaper and had about 570,000 followers. She had apparently confused Monroe with another left-wing columnist.

Warby ruled that Monroe is entitled to ‘fair and reasonable compensation’, assessed at £24,000. Hopkins was also ordered to pay £107,000 on account of costs within 28 days.

In closing remarks he noted that the case could easily have been resolved at an early stage. ‘There was an open offer to settle for £5,000. It was a reasonable offer. There could have been an offer of amends under the Defamation Act 1996. The costs would have been a fraction of those which I am sure these parties have incurred in the event.’

Michael Skrein, entertainment and media partner at international firm Reed Smith said that the case  provides useful guidance on what the Defamation Act means by serious harm. ‘The judge made it clear that whilst the claimant may not have proved that her reputation suffered gravely, she had established that the publications complained of caused serious harm to her reputation, and therefore met the threshold set by the act.’

Monroe’s solicitor Mark Lewis, partner at London firm Seddons Solicitors, said his client had been vindicated in full from the libellous and wholly false accusation by Katie Hopkins that she had supported the vandalisation of a war memorial.

‘The price of not saying sorry has been very high. Hopkins has had to pay out of her own pocket a six-figure sum in damages and costs for a tweet that should have been deleted within minutes as soon as she was told it was wrong. On this occasion, the cost of renting that gob was particularly high.’

Lewis added: ‘Hopkins claimed that Twitter was just the wild west where anything goes. The judge has shown that there is no such thing as a Twitter outlaw.’