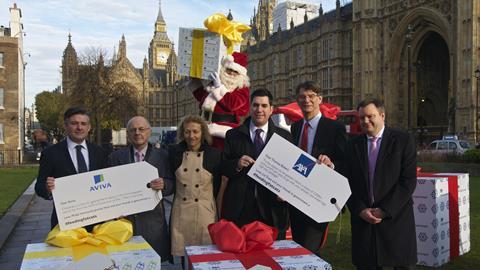 A claim that four major insurance companies will receive at least £200m a year ‘robbed’ from the NHS, taxpayers and injured people is at the centre of a campaign unveiled today against the proposed personal injury reforms. The initiative, designed by trade union firm Thompsons, has the support of the opposition justice frontbench.

In a Westminster photocall this morning, giant presents from justice secretary Liz Truss and her ministerial colleagues were loaded onto Santa’s sleigh and taken to the UK headquarters of Axa, Aviva, Admiral and Direct Line to highlight the financial gain to the insurance industry of the government’s ‘whiplash’ reforms.

Shadow minister Christina Rees (pictured, centre), who is supporting the FeedingFatCats campaign, said: ‘It’s an outrage that the government openly concedes their proposed changes will starve the NHS and the Treasury of millions while gifting insurers at least £200m in extra profit each year.’

Shadow secretary of state for justice Richard Burgon (third from right) said: ‘The government has offered no justification for including work accidents in what is being billed as a reform of whiplash. The proposed changes are in fact about the insurance industry seizing control of the legal process and undermining the longstanding legal principle that the guilty party pays.

‘These changes would be a licence for insurance companies to under-settle or not pay out at all to nearly a million injured people a year.’

The campaign also incorporates Christmas carols specially rewritten for the purpose, including 'We Wish You a Merry Christmas'. One verse declares:

This deal is very murky

But it’s costing you dear.'

The campaign has joined the Law Society in calling for an extension of a consultation into the reforms, which is due to close on 6 January.