New security legislation nodded through by China's top legislature today has been condemned as an 'unconscionable' threat to judicial independence in Hong Kong. In a joint statement the International Bar Association and the International Bar Association’s Human Rights Institute (IBAHRI) said the move would lead to Beijing imposing laws in violation of the 'one country, two systems' rule that has governed the special administrative region since 1997.

In a statement, the IBA and IBAHRI said: 'We are concerned that the proposed legislation will be used as a further means to restrict the rights of peaceful protestors. This would be a direct contravention of obligations to uphold rights under the Basic Law and International Human Rights Law, including Article 27 of the Basic Law which grants Hong Kong residents the "freedom of speech, of the press and of publication; freedom of association and of demonstration".

'We are concerned that the central and city government security agencies will establish a presence in Hong Kong under the guise of national security, and that Hong Kong’s foreign judges, who sit on the Court of Final Appeal to ensure international standards are met, will no longer be allowed to adjudicate on cases of national security. This threat to judicial independence is unconscionable,' the statement signed by IBA president Horacio Bernades Neto and Helena Kennedy QC, director of the IBAHRI, said.

A 'draft decision on establishing and improving the legal system and enforcement mechanisms for the Hong Kong Special Administrative Region to safeguard national security', was approved today by the National People’s Congress in Beijing, with 2,878 deputies from around the country voting in favour and one voting against. Six abstained. 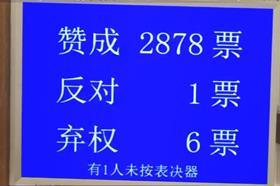 The ayes have it: National People's Congress vote on security law

Beijing's move has already attracted worldwide criticism. The UK, Australia and Canada last week said that imposing a law on Hong Kong’s behalf without the direct participation of its people, legislature or judiciary would undermine autonomy.  Yesterday the US secretary of state, Mike Pompeo, said it would threaten Hong Kong's special trading status. 'No reasonable person can assert today that Hong Kong maintains a high degree of autonomy from China, given facts on the ground,' Pompeo said.