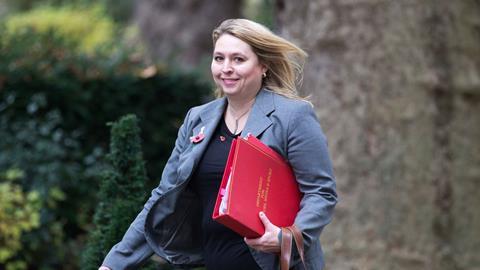 The government today insisted that it has not yet made up its mind whether to implement the ‘stick’ of its plans for press regulation, a measure that would make publishers liable for the costs of both sides in defamation cases – even when claims are successfully defended.

Announcing the opening of a consultation today, Karen Bradley (pictured), culture secretary, told parliament: ‘We think the time is right to consider section 40 further.’ Section 40 of the Crime and Courts Act 2013 was introduced to ‘incentivise’ newspapers to join a recognised regulator.

It has passed in to law but remains uncommenced.

The government has come under pressure to implement the measure following the first recognition by Royal Charger of a ‘self-regulator’, IMPRESS. On 11 October the Lords approved an amendment to the Investigatory Powers Bill that would implement Section 40; it was defeated by 298 votes to 261 in the House of Commons this afternoon.

The consultation appears to be an attempt to head off the controversy. It asks for views on four options:

‘In particular, we will review current penalties for data protection breaches and aim for sanctions that act as effective deterrents against the misuse of personal data in all contexts.’

The government is also seeking views on part 2 of the Leveson inquiry, which was designed to look at wrongdoing in the press and the police, four years after part 1 was published.

The 10-week consultation closes on 10 January.