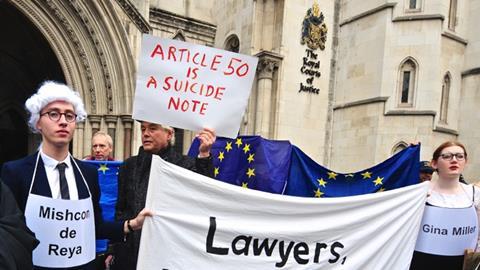 Demonstrators for and against membership of the EU gathered outside the Royal Courts of Justice today at the start of a hearing into whether triggering Article 50 — which formally starts divorce proceedings from the EU — requires an act of parliament.

The hearing, which is due to conclude next week, has been brought by claimants including businesswoman Gina Miller, who has said the government cannot use its royal prerogative to take Britain out of the EU.

Prime Minister Theresa May has said she will activate Article 50 by the end of March next year following a 51.9% to 48.1% vote in favour of leaving the union.

Nikos Skoutaris, a lecturer in EU law at the University of East Anglia, told the Gazette the question was not whether the UK should or should not withdraw but what the appropriate procedure for triggering the procedure should be.

‘It is hardly disputable that foreign affairs fall under the royal prerogative. In that sense, the administration should be able to trigger Article 50 unilaterally,’ he said.

‘However, there is a question to be made about the role of parliament in the most fundamental constitutional change the UK has experienced for at least a generation.’

He added: ‘Should parliament set some guidelines that the government would have to follow during the negotiations or should it blindly trust the government?’

Seperately, barristers Manjit Gill and Ramby de Mello, both of No5 Chambers, have been instructed by interested parties in the challenge brought by Miller.

They will support Miller’s claim and will additionally argue that the immigration status of European Economic Area nationals and children that are lawful UK residents must be considered by parliament before Article 50 is triggered.