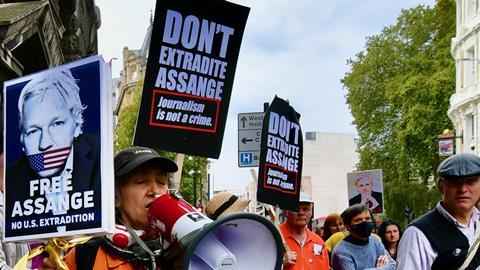 The human rights arm of the International Bar Association has strongly criticised the potential extradition of Julian Assange to the US as the Wikileaks founder’s hearing resumes at the Old Bailey.

Australian-born Assange is fighting efforts to send him to the US where he faces 18 counts of violating the Espionage Act.

In a statement today the International Bar Association’s Human Rights Institute (IBAHRI) said that granting the US government’s request would:

‘We are concerned that this case is politically charged,’ IBAHRI’s director, Baroness Kennedy (Helena Kennedy QC), said: 'We can have little confidence in the extremely polarised situation in the US at present and are concerned that there is a risk to justice in the case of Julian Assange. We hope that the English court hearing his case is true to its commitment to the rule of law, human rights and justice, and delivers a fair outcome in this extradition hearing.'

IBAHRI co-chair and former Justice of the High Court of Australia, the Hon Michael Kirby, said: 'If Mr Assange is extradited, it will set a dangerous precedent endangering freedom of the press and expression in two countries boasting mature democratic systems. It will have a chilling effect on free expression by whistle-blowers and journalists disclosing to the public potentially grave human rights law violations. The UK and US must remember their obligations under Article 19 of the Universal Declaration of Human Rights and of the International Covenant on Civil and Political Rights guaranteeing an individual’s right to freedom of expression.'