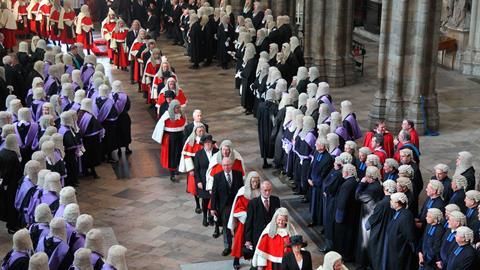 A campaign to abolish the religious element of ceremonies to mark the start of the legal year has opened with a warning that services undermine public confidence in the judiciary.

In a letter to the lord chancellor and senior judges, a retired Ministry of Justice civil servant and a Conservative former parliamentary candidate say that if no action is taken decisions relating to religious matters might be open to challenge under articles 6 and 9 of the European Convention on Human Rights.

Picturesque church services, involving processions of robed judges, are a traditional feature of the opening of the legal year. This year’s Westminster Abbey service takes place next Tuesday, followed by the ‘lord chancellor’s breakfast’ at the Palace of Westminster. The letter notes that the tradition of the judges’ service dates back to the middle ages. ‘The medieval belief was that it was proper for judges to seek “divine guidance”. The world has moved on, and today’s standards are higher,’ say John Butcher and Peter Fisher.

They say that, by attending services ‘in their official capacity, in public, during working hours, wearing their judicial robes’, judges create ‘an appearance of bias’. When issues touching on religion arise, non-Christian parties to a case will have fears that a judge may treat them less favourably, the authors say. ‘Their apprehension is real and these fears seriously undermine public confidence in justice.’

Fisher, who spent 40 years at the MoJ and its predecessor the Lord Chancellor’s Department, told the Gazette: ‘We’re not threatening to take legal action. At this stage we’re calling the lord chancellor’s attention to the fact that the problem exists, and offering options for dealing with it.’

Options range from outright abolition to holding a service for judges to attend in their own time and without wearing their judicial robes. If no action is taken, judgments would be open to appeal, Fisher said. While the issue might be settled by the law taking its course ‘that process might take years to conclude and be costly – with much uncertainty in the meantime’.

The authors also raise the prospect of applying for a judicial review of the practice of judges attending services in their official capacity. ‘Such an application would, of course, need to be heard by a judge who has never attended a service.’

Charlie Klendjian, secretary of the Lawyers’ Secular Society, said he supported the sentiments in the letter. ‘Our view is that state institutions and ceremonies – especially the legal system – should not have a religious flavour.’