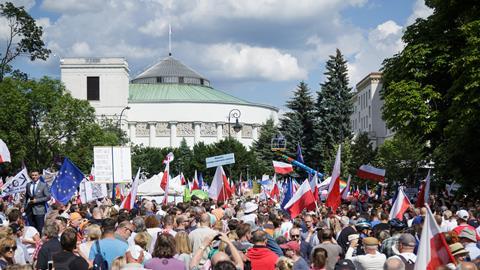 New laws threatening the independence of the judiciary have prompted mass protests in Poland. A measure that would force all Supreme Court judges to step down unless they have the approval of the country’s justice minister is expected to go before parliament this week. It follows the approval of a separate bill giving parliament powers to control the National Council of the Judiciary, the body responsible for judicial appointments.

Justice minister Zbigniew Ziobro said that the changes are necessary because the system of appointing judges was undemocratic. ’We want to end corporatism and introduce the oxygen of democracy,’ the BBC quotes him as saying. However, opposition politicians say the measures, part of a package of reforms introduced by the governing Law and Justice Party, would threaten the rule of law.

A spokesperson for 47-member-state the Council of Europe said: ’We are concerned by this development which raises questions over the rule of law and we are hoping that the Polish authorities will engage in dialogue.’

The European Commission has already accused the government in Warsaw of undermining democratic checks and balances.

In May, the deteriorating relationship between the executive and the judiciary in Poland prompted HM Judiciary to take the highly unusual step of publicly airing concerns.