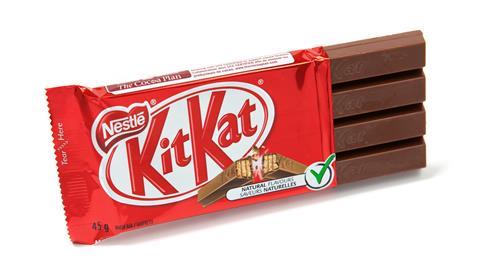 Nestlé has once again failed to gain trade mark protection for the shape of its four-finger KitKat bar, in the latest twist in a long running battle with fellow confectionery giant Cadbury.

A decision handed down by the Court of Appeal today upheld a High Court ruling from January last year. In that ruling, Mr Justice Arnold said the shape had not acquired distinctive character and that Nestlé had not promoted the shape as a selling point because packaging hid the design.

She said the case is interesting as it examines the type of use and consumer recognition required to obtain monopoly protection over a shape mark. 'Businesses seeking to protect non-traditional trade marks such as shapes or packaging will need to provide evidence that consumers are relying on that trade mark to identify the origin of the product,’ she added.

Nestlé and Cadbury (appearing in court under the name of its owner Mondelēz International) have been involved in an IP battle spanning close to a decade.

In another decision in December last year, the EU’s General Court annulled a previous ruling by the EU Intellectual Property Office (EUIPO) that granted Nestlé a trademark in various EU countries.

Robert Guthrie, a partner in the IP litigation department at international firm Osborne Clarke, said the contrast with the general court ruling may be that the Court of Appeal was less inclined to follow the approach as a result of Brexit and that this is an early indication of the ways in which UK and EU trade marks may diverge. 'It seems likely that in the future it will be harder to register shapes as trade marks in the UK than in the EU,’ he said.

A Nestlé spokesperson said the company is disappointed by the judgment and considering next steps. ‘This judgment does not mean that our four finger-shape is now free for use in the UK or elsewhere. KitKat is much loved around the world and its four finger-shape is well-known by consumers,’ they added.

A spokesperson for Mondelēz International said: 'We are pleased with the Court of Appeal’s decision today and welcome their conclusion. As we have previously stated, we do not believe the shape of the KitKat bar should be protected as a trade mark in the UK.'