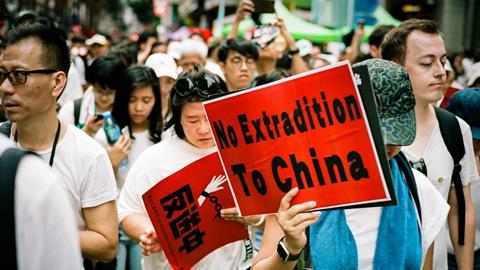 The Law Society of England and Wales has added its voice to a campaign which brought hundreds of thousands of people out on the streets of Hong Kong in protest against new extradition laws. The Society is one of some 70 international bodies to sign an open letter raising concerns about the amendments, which could lead to Hong Kong residents facing trial in Beijing courts.

Hong Kong's Basic Law, which underpined the 1997 return of sovereignty to China, guaranteed judicial separation for 50 years. Hong Kong has no extradition agreement with mainland China (or with the Republic of China, Taiwan). However two new Hong Kong measures, the Fugitive Offenders' Ordinance and the Mutual Legal Assistance in Criminal Matters Ordinance would enable suspects to be handed over on the basis of prima facie evidence.

The measures were drafted after a murder in Taiwan last year, allegedly by a Hong Kong man. The Hong Kong authorities say they contain adequate safeguards for human rights. However this claim is vigorously contested by human rights groups, including Amnesty International, Hong Kong Human Rights Monitor and Human Rights Watch. In an open letter, the organisations say they are 'especially concerned' that new law makes anyone accused of 'aiding, abetting, counselling or procuring the commission of' an offence being liable to extradition. This could 'put at risk anyone in the territory of Hong Kong who has carried out work related to the mainland, including human rights defenders, journalists, NGO workers and social workers'.

It notes that China's justice system has 'a record of arbitrary detention, torture and other ill-treatment' and that the mainland judiciary lacks independence from the government and the Chinese Communist Party. Among the bodies to join the Law Society in signing the letter are the International Association of People's Lawyers, Lawyers Rights Watch Canada and Reporters without Borders.