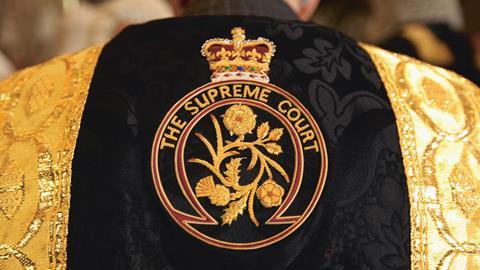 Male and white Supreme Court aims to open up

The president of the Supreme Court has announced measures to help boost diversity at the UK’s highest court when competition opens for several positions due to fall vacant over the next few years.

Speaking tonight, Lord Neuberger confirmed that he plans to retire next year, as will Lord Clarke.

Lord Toulson retired last summer, meaning that the court will have lost half of its justices, Neuberger said.

Over the past decade, all SC justices selected have been male, white and predominantly privately educated. Just one is female - Lady Hale - and she sits alongside ten white men. While two of the eleven were not privately educated, none of the justices are from a disadvantaged background.

Speaking during a talk at Inner Temple, Neuberger set out new measures to make sure that as ‘wide a range of candidates as possible’ are considered to fill the vacancies.

These include a ‘familiarisation’ scheme to attract candidates thinking of applying and the possibility of judges working flexibly or part-time.

There will also be an ‘equal merit’ test and a range of outreach exercises to attract candidates from diverse backgrounds.

The court will also publish a policy on implementing the new ‘equal merit provision’ and set out guidance on flexible working in the job information pack.

The court will redesign and reword the advertisement of judicial vacancies to appear in a range of publications, and work with groups including the Law Society and the Bar Council.

‘I would expect wide advertising in print and online when the vacancies become available, with a redesigned advert stressing the fact that the Commission encourages applications from the widest variety of those eligible,’ Neuberger said.

Lord chancellor Liz Truss said it is right that such a ‘crucial institution’ taps into all the talents of the country.

‘That is why I wholeheartedly support the steps the court is taking to introduce a more flexible and open appointment process for Supreme Court judges. I urge people with the right qualities from all backgrounds to apply for these important positions,’ she added.

The new posts will be advertised in tranches of two or three at a time, beginning with three early in the new year. If a president is appointed from the current cadre, a fourth position will open up. A further six judges are due to reach retirement age by 2020.