May under attack from UN human rights chief

The United Nations’ leading advocate for human rights last night singled out Theresa May for criticism over remarks the prime minister made during her general election campaign. Zeid Ra’ad Al Hussein, UN high commissioner for human rights, told an event held at the Law Society’s headquarters that May's statement that human rights laws should be overturned if they 'get in the way' of the fight against terrorism were 'highly regrettable'.

Her comments were 'a gift from a major western leader to every authoritarian figure around the world who shamelessly violates human rights under the pretext of fighting terrorism,' Al Hussein said. 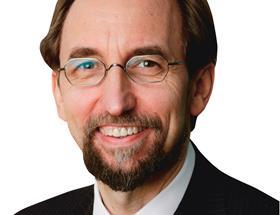 Al Hussein was delivering the annual Grotius lecture for the British Institute of International and Comparative Law. The event commemorates Hugo Grotius (1583-1645), regarded as the father of modern international law.

Speaking on the topic 'Is international human rights law under threat?', Al Hussein said that the bodies of international law created in the aftermath of World War II are 'now endangered'. Examples of states ignoring these institutions include Russia’s seizure and annexation of Crimea and 'the almost enthusiastic derogation by European powers of their obligations under the 1951 Refugee Convention', he said. The fragility of the ban on torture is illustrated by the fact that no single country abides by all the terms of the 1984 UN Convention against Torture, he said.

'Why are we fighting the terrorists in the first place, if not to defend both the physical well-being of people and the very human rights and values the prime minister now says she is willing, in part, to sacrifice?'

He continued: 'At least part of the answer may lie in market conditions. Human rights law has long been ridiculed by an influential tabloid press here in the UK, feeding with relish on what it paints as the absurd findings of the European Court of Human Rights in Strasbourg. This viewpoint has some resonance,' with human rights law 'seen by far too many people as too removed from everyday life, very continental, too lawyerly, too activist, ultimately too weird.'

Arbitrary detention of suspects is a gift to terrorism, he stressed. Rather than pandering to populist law measures to feed 'reptilian' urges, governments must be 'precise in the pursuit of terrorism,' he said.

Answering questions, Al Hussein acknowledged that the language used by human rights lawyers can be seen as provocative. ’We too have to be smarter and more careful about how we promote human rights; sometimes we are not good at that.’