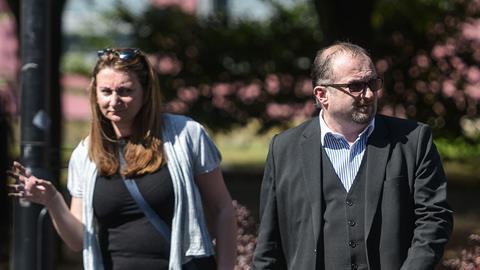 A paid McKenzie friend has been jailed for perverting the course of justice in a family court.

David Bright (pictured, above right), who runs The Parents Voice, an organisation that offers help in family cases, was sentenced to 12 months in prison at Wood Green Crown Court this morning.

Bright submitted a psychology report during a dispute earlier this year that had been compiled by his colleague and partner Claire Mann (pictured, above left).

Mann, who used her maiden name Silverstone, falsely claimed to be a clinical psychologist.

The court heard that one of the parents involved in the dispute had been ‘emotionally and financially’ affected by the case and lost contact with his children as a result.

Bright, who pleaded not guilty, had claimed that he believed Mann’s credentials were genuine and that the report was authentic.

However, sentencing the pair, recorder Robert Morrison said the court ‘saw through that claim’.

Morrison said he ‘could not ignore the seriousness of deceit in a family court’.

The court heard that Bright had previously received a five-year probation order after being found guilty of money laundering in the US in 1996. Morrison said that case would not be taken into account as little information was available.

Mann, who pleaded guilty, was sentenced to nine months in prison for the family dispute.

She was also sentenced to three years in prison for running a harassment campaign against a mother at her daughter’s school and for communicating a false bomb hoax. The nine-month sentence will run concurrently with the three-year term.

The court heard that Mann, who was listed as a secretary at TPV, made a bomb threat to a synagogue in North London and tried to pin it on another parent, Roz Page, after a row over a children’s party invitation escalated.

Mann, 43, sent Page abusive messages and tried to blame her for the hoax by sending similar texts to her own phone.

Mann’s property was searched the day after the hoax. The box for the phone was found hidden in her wardrobe.

Morrison asked whether a restraining order could be imposed on Bright banning him from acting as a McKenzie friend in the future.

A consultation by HM Judiciary on the controversial issue of paid McKenzie friends closed in June.