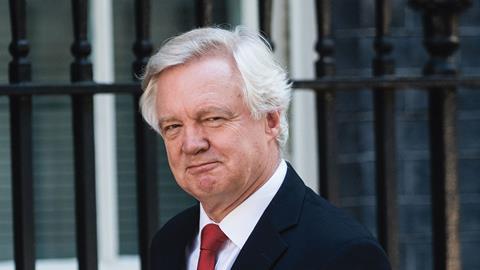 Historic case law from the Court of Justice of the European Union will be given the same precedent status as decisions from domestic courts, the government proposes today in a slim white paper setting out  its plans for handling the legal complexities of Brexit. The paper, Legislating for the United Kingdom’s withdrawal from the European Union, announced that a forthcoming Great Repeal Bill will:

Introducing the 38-page white paper, David Davis (pictured), secretary of state for exiting the European Union, stresses that the Great Repeal Bill will strive for continuity. ’It is not a vehicle for policy changes – but it will give the government the necessary power to correct or remove the laws that would otherwise not function properly once we have left the EU.’

The paper acknowledges warnings from legal professionals that such corrections will be widely necessary. Converting the corpus of EU law - the aquis communautaire - 'will not be sufficient to provide a smooth and orderly exit’.

The paper notes that there will be ’gaps where some areas of converted law will be entirely unable to operate because we are no longer a member of the EU. There will also be cases where EU law will cease to operate as intended or will be redundant once we leave. In some cases EU law is based on reciprocal arrangements, with all member states treating certain situations in the same way. If such reciprocal arrangements are not secured as a part of our new relationship with the EU, it may not be in the national interest, or workable, to continue to operate those arrangements alone.’

On the prospect of major changes being made without primary legislation, the white paper is unapologetic about the need to employ statutory instruments, estimating that between 800 and 1,000 will be necessary. 'The government is mindful of the need to ensure that the right balance is struck between the need for scrutiny and the need for speed. In most cases, the corrections made by the statutory instruments will need to be made before the UK leaves the EU, so that we have a functioning statute book on the day of the UK’s withdrawal,' it states. Enabling powers in the Great Repeal Bill will come into force as soon as the bill gains Royal Assent, so that the process of correcting the statute book can begin.

In a bid to head off possible challenges under the EU Charter of Fundamental Rights, the white paper says the charter’s relevance is removed by the UK’s withdrawal. ’It cannot be right that the charter could be used to bring challenges against the government, or for UK legislation after our withdrawal to be struck down on the basis of the charter. On that basis the charter will not be converted into UK law by the Great Repeal Bill.’

Law Society vice president Joe Egan said: ‘Transposing EU legislation isn't straightforward. A lot of laws refer to the internal market or to EU institutions which will not be relevant post-Brexit. Also, ministers will be given powers to amend legislation to “take account of the negotiations as they proceed” over the next two years.

‘While we are pleased that the white paper recognises the need to balance appropriate parliamentary scrutiny with speed in this massive undertaking, the sheer volume of law which must be incorporated leaves scope for expediency by the government. EU legislation covers a lot of ground, nevertheless it is essential that parliament is able to scrutinise any significant changes to laws that govern our lives.’

The white paper promises to be ’the beginning of a discussion between government and parliament as to the most pragmatic and effective approach to take’. Comments on the white paper can be sent to repeal-bill@dexeu.gov.uk.