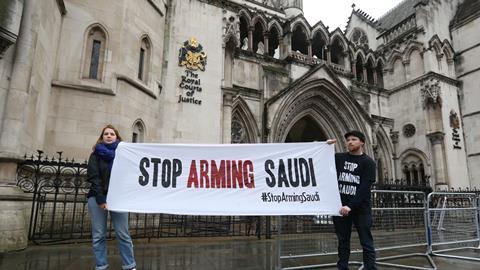 Secret evidence about the extent of links between the UK and Saudi Arabia has helped kill off a legal challenge to the sale of weapons used in the conflict in Yemen.

Ruling in Campaign Against Arms Trade v Secretary of State for International Trade today, Lord Justice Burnett and Mr Justice Haddon-Cave defend the use of secret hearings, so called closed material procedures. 'The advantage of the closed material procedure is that we have had full access to all the facts and materials relied upon by the secretary of state,' they state. These materials are considered in a secret 'closed judgment'. The published judgment states: 'It is sufficient to record here that the closed material, in our view, provides valuable additional support for the conclusion that the judgements made by the secretary of state were rational.'

The action was brought by campaign group Campaign Against Arms Trade against the decision to continue granting export licences for arms including Typhoon strike aircraft to Saudi Arabia following the country's intervention in neighbouring Yemen. At least 10,000 people have been killed since 2015 in the war against Iranian-backed forces.

Amnesty International, Human Rights Watch, Rights Watch UK and Oxfam intervened in the action, which took evidence over a three-day hearing - half of which was closed. The claimants argued that the arms exports contravened the government's policy because of the Saudi-led coalition had targeted civilians in Yemen.

Dismissing the challenge, the judges ruled that the government had available 'a much wider range of information' than its non-governmental organisation critics. This included MoD-sourced imagery and defence Intelligence reports. 'Much of this information is sensitive and necessarily cannot be referred to in detail in open session for national security reasons,' the judgment states.

According to the judgment, the Ministry of Defence 'provides significant training to the Saudi armed forces in relation to targeting and compliance with international humanitarian law'.

It concludes that the secretary of state for international trade 'was rationally entitled to conclude' that the coalition was not deliberately targeting civilians and that there was no 'clear risk' that there might be serious violations of international humanitarian law which would require arms sales to be suspended or cancelled.

The Campaign Against the Arms Trade said it would appeal. Rosa Curling, associate at London firm Leigh Day, said: 'The law is clear: where there is a clear risk UK arms might be used in the commission of serious violations of international law, arm sales cannot go ahead. Nothing in the open evidence presented by the UK government to the court suggests this risk does not exist in relation to arms to Saudi Arabia.'