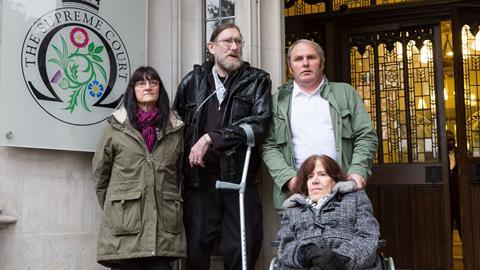 Two families who challenged the government over its ‘bedroom tax’ have won their case at the Supreme Court – though other claims were dismissed.

The court ruled that by removing what it called the ‘spare room subsidy’, the Department for Work and Pensions discriminated against disabled woman Jacqueline Carmichael and her husband Jayson. Mrs Carmichael has spina bifida and needs to sleep in a separate room from her husband.

Separately, the court also dismissed the government’s appeal in a case involving Paul and Susan Rutherford who provide around-the-clock care for their disabled grandson. They have a spare third bedroom for overnight carers.

The court found that there was ‘an ironic and inexplicable inconsistency in the secretary of state’s approach’ to the justification of the difference in treatment between disabled adults and disabled children.

However, cases brought by other families were dismissed, including a women identified as ‘A’ who was moved homes for security reasons. ‘A’ was moved to a three-bed ‘safe house’ because there was a shortage of two-bed homes.

Rosa Curling, associate solicitor at Leigh Day, said the firm was ‘extremely pleased’ with the judgment.

‘It is very concerning that the government thought it appropriate to drag this case through the courts, for nearly three years, leaving Jacqui and Jayson scared and confused over their future in their home. With this ruling, they can now start to make future plans again.

‘My clients would like to thank the Legal Aid Agency for funding this claim through the courts. Without their support, this case would not have been possible.’