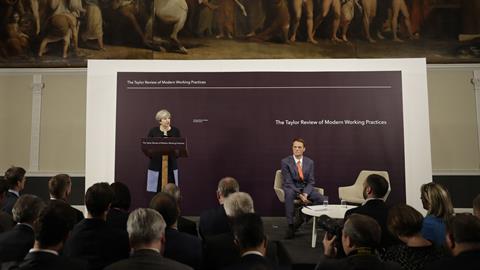 A call for fresh legislation on employment status has been generally welcomed - though solicitors have warned that Brexit and the government’s reduced majority in parliament could get in the way of a ‘gargantuan’ task.

In his review into modern employment practices published today, political strategist Matthew Taylor recommends that the government take a ‘fresh look’ at legislation to help citizens understand what employment status applies to them what rights they are entitled to.

The review recommends that the government should replace the ‘minimalistic approach to legislation’ with a clearer outline of the tests for employment status, setting out key principles in primary legislation.

As the Gazette reported yesterday, Taylor, a former political aide to Tony Blair, has also recommended re-defining 'workers' as ‘dependent contractors’. The status will be primarily used for people operating in the ‘gig economy’, where employers treat workers as self-employed to avoid liability for holiday and sickness pay.

‘The status of “dependent contractor” should have a clearer definition which better reflects the reality of modern working arrangements, properly capturing those more casual employment relationships that are on the increase today,’ the review states.

The review also calls for ’a review’ of employment tribunal fees, and the wider tribunal system, in ’which the odds are often stacked against the worker’. Law Society president Joe Egan welcomed the recognition that fees create a barrier to justice. ‘We know that employment tribunal fees have cut people’s ability to defend their rights at work by 70%, and so it is only right that someone should be able to get a ruling on what rights they have at work without paying exorbitant fees.’

But employment specialists warned that the reality of implementing new legislation would prove a difficult task.

Ruth Buchanan, employment partner at silver circle firm Ashurst, said ‘the task is gargantuan’, adding: ‘there is a real risk that a Brexit-mired parliament will not get to implement these changes for a number of years.’

Richard Fox, head of employment law at Kingsley Napley, said the big question would be whether Prime Minister Theresa May will be practically able to drive through the changes. ‘With Brexit priorities and no significant working majority following the last general election, this is now going to be much more complicated than first thought.’

He added: ‘We need to find a proper balance between employers’ understandable desire to embrace new and effective ways of engaging individuals in their businesses, with the need to do so on fair and reasonable terms.’

Paul Griffin, partner in the employment team at international firm Norton Rose Fulbright, said the recommendations throw interesting questions into the mix but said ’significant work’ will be required to introduce the amendments to the current legislation.

One of the other recommendations in the review is to help the ‘dependent contractors’ secure payment nearer to the national minimum wage. It says this can be doing using ‘piece rates’ to enable workers to know what the demand is and whether pay will increase for certain tasks.

This would mean platforms like Uber and Deliveroo would have to use the ‘vast amount of data’ they have on current demand and work out what the average ‘job’ [a delivery or taxi ride] would cost and make sure that worker’s remuneration equated to the minimum wage. It would be expected of the employers to be transparent with staff.

However, the review notes that if ’dependent contractors’ knowingly work in quiet times then they should take responsibility for that decision.

The review does not go so far as to condemn or suggest a ban on zero-hours contracts but recommends that the government introduces a right to request a direct contract of employment for agency workers who have been placed with the same hirer for 12 months.