Westminster Magistrates Court has closed its press room, in a move that will further stoke fears about the growing lack of oversight and transparency of local courts. 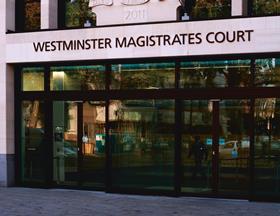 HM Courts and Tribunals Service said that the room was ‘little used’ and that the building needed to ‘maximise space’. The room has now become a space for legal advocates.

In a recent column Andrew Langdon QC, chair of the Bar Council, said that a decline in court reporters meant that justice is operating ‘essentially unseen and unheard by the public.’

He wrote: ‘A large majority of cases, although conducted in public hearings up and down the land, and although producing outcomes that often dramatically affect the lives of the citizens concerned, operate essentially unseen and unheard by the public.’

Earlier this year, the Gazette also noted that as the local press declines, courts, police stations and council meetings are now going largely unattended and unreported.

Some of the most high-profile cases have started life at Westminster. A bid by a former chief of staff of the Iraqi army to bring a private prosecution against former prime minister Tony Blair over the Iraq war, struck down by the Court of Appeal last month, began at the court last November.