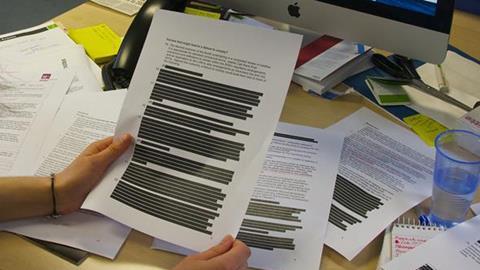 Whistleblowers and journalists 'at risk of prison' in secrets law reform

Proposals by the Law Commission to reform the 1989 Official Secrets Act (OSA) could lead to the imprisonment of civil servants and journalists for disclosing information that would be available to anyone asking for it under the Freedom of Information Act, a leading campaigner for freedom of information has said.

In a joint response to Law Commission proposals on reforming the act, campaign groups Article 19 and the Campaign for Freedom of Information (CFoI) say the commission's proposals to modernise and simplify laws surrounding the protection of official data 'would go a long way towards turning the clock back towards the discredited section 2 of the 1911 Official Secrets Act.'

Section 2 of the 1911 Act, which criminalised the wrongful communication of information, was replaced by the 1989 Act after a jury failed to convict a Ministry of Defence civil servant for passing information to an MP. In its consultation, the Law Commission proposed replacing the 1911 Official Secrets Act, along with namesake measures passed in 1920 and 1939 with a single Espionage Act. The commission claimed that the proposals would 'include greater safeguards for whistle-blowers than under the current laws whilst also ensuring that Britain is protected in the 21st century'.

However veteran freedom of information campaigner Maurice Frankel, director of the CFoI, said the proposals would 'set the FOI Act and the Official Secrets Act on a collision course.'

The legislation as proposed would make it an official secrets offence to leak information which anyone could obtain under FOI, Frankel said. It would also no longer be necessary to show that a disclosure 'is or is likely to cause damage'. Under the proposals, the prosecution would merely have to show that the information was ‘capable’ of causing damage,' he said. 'A disclosure which might cause damage but is extremely unlikely to do so would become an offence under these proposals if the discloser knew or had reasonable grounds to believe that damage was possible.'

Frankel also points out what he says are basic errors in the Law Commission's research. A US comment on the difficulty of bringing prosecutions facing the 'likelihood of damage' hurdle was 'not from the report cited [by the commission] but from a memorandum describing the "personal views" of the vice-chair of the agency that produced it,' he says. On a reference to comments by Lord Nicholls in the case of MI5 officer David Shayler, Frankel notes: 'Lord Nicholls was not on the bench in that case: the words cited are from the judgment of Lord Hope of Craighead.'

An extended consultation into the Law Commission proposals ended on 3 May. The commission says it is now analysing responses.