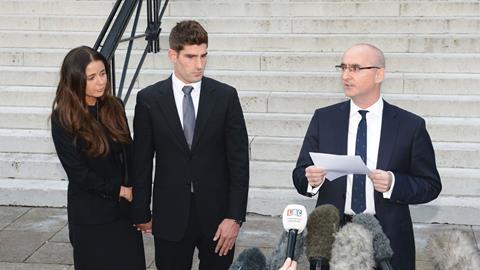 Who? Shaun Draycott, solicitor-advocate and director of Draycott Browne Ltd in Manchester.

Why is he in the news? Represented football player Ched Evans who was acquitted of raping a woman in a hotel room near Rhyl in North Wales in May 2011.

Evans had been convicted of rape at Caernarfon Crown Court in April 2012, which he unsuccessfully appealed in October 2012. Draycott was instructed in June 2014 in relation to an ultimately successful application to the Criminal Cases Review Commission (CCRC). Following a retrial, he was acquitted at Cardiff Crown Court on Friday.

Draycott said the legal team was able to identify fresh evidence – two witnesses who had had a sexual relationship with the complainant.

He said: ‘The overall circumstances of the sexual activity, as described by the two fresh evidence witnesses, were strikingly similar to those that had been described by Evans when he volunteered an account to the police in May 2011. The evidence provided by these witnesses formed the basis for the CCRC referral and led to the Court of Appeal quashing the conviction and ordering a retrial.’

Thoughts on the case: ‘It was a privilege to be involved in a case as deserving as this. I first met Evans in prison custody in 2014. At that time, the only option available to him was to lodge an application with the CCRC. The odds were weighted against him given that fewer than 5% of all applications result in cases being referred to the Court of Appeal.

‘It is difficult to imagine spending any amount of time in custody. It follows that I feel a sense of sympathy for Evans who lost two-and-a-half years of his life for an offence that he did not commit. I think I can boldly say that.

‘There was a great deal of complexity, a massive degree of public interest and a huge level of responsibility.

‘It was by no means certain that the Court of Appeal would accept the evidence of the two fresh witnesses but section 41 of the Youth Justice and Criminal Evidence Act is not an absolute prohibition on the introduction of evidence relevant to a rape complainant’s sexual history; it is not an impenetrable wall. It is, however, there for a good reason. No complainant in a rape case should be gratuitously challenged about her sexual past.

‘In this case, however, the fresh evidence was absolutely relevant to the issue of consent and offered extremely powerful support for the account that Mr Evans had given soon after the incident. We felt that the “high wall” that is section 41 could be scaled, but it was very much a matter for the court.

‘The court could have said, “we do not agree, the fresh evidence is not admissible”. Had that have been the case the appeal would have failed.’

Dealing with the media: ‘Evans benefitted from someone who controlled the media on his behalf, so I was not heavily troubled.

‘What the media have seized upon are those observations, from a number of groups and individuals, which have been well intentioned but not well informed. I have seen references to the criminal justice system having been put back by 30 years, that a precedent has been set that will allow rape victims to be cross-examined in a manner consistent with the Evans case and that this will stop victims from stepping forward. There is absolutely no foundation for any of that.

‘The evidence and circumstances of the Evans case, as the Court of Appeal observed, were very unusual. The fresh evidence was so similar, in terms of its detail, to that Evans had given to police in May 2012 that it would have been quite wrong for a court not to have heard and accepted it.’

‘Unforgettable, for me, was the level of public interest associated with Evans’ inability to secure a contract to play football again – it was nothing like I had known before.

‘I spent many hours dealing with phone calls, messages and emails surrounding the link between the case and his inability to secure a football contract. The national interest associated with a convicted person, as he was at the time, not being able to secure a job, did not seem to have any limits at all.’

Why become a lawyer? ‘At 17 years of age, I stumbled into a job as a clerk at a then small but progressive firm called Jones Maidment Wilson. Keen to progress, I went to night school and graduated in law four years later. I was and remain passionate about criminal law and the representation of those who are in need.

Career high: ‘Happily there are many, but appearing before the Court of Appeal as a higher court advocate for the first time and walking away unscathed has a special place.’

Career low: ‘As a young advocate, brimming with pride, after securing bail for a woman accused of murdering her husband, I began my journey back to the office only to run out of petrol on the M62. Walking two miles down the hard shoulder is quite a way to be brought back down to earth.’