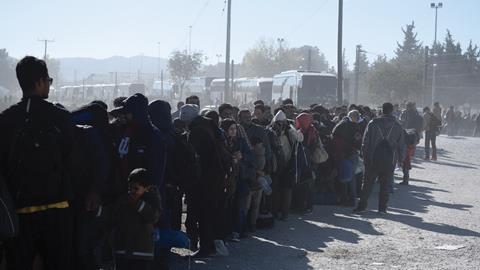 ‘Refugees’, ‘migrants’ and the Brexit vote

Popular familiarity does not necessarily reflect an equally robust understanding.

Over the past year, terms like ‘migrant crisis’ have gained strong purchase in the public lexicon. Unfortunately, popular familiarity does not necessarily reflect an equally robust understanding.

In the UK, ‘migrant crisis’ can increasingly be used to refer to a range of issues, including the recent increase in Middle Eastern and African refugees, economic migrants from the EU, perceived student visa abuse, and recently released record domestic net migration figures. Indeed, it often describes a frustration with all of these collectively.

Regrettably, confusion and disagreements about the meaning of the term may have severe consequences as distinct issues bleed into one another with worrying effects.

A refugee is an individual who, out of necessity and ‘owing to a well-founded fear of being persecuted for reasons of race, religion, nationality, membership of a particular social group or political opinion, is outside the country of his nationality and is unable or, owing to such fear, is unwilling to avail himself of the protection of that country’. Often these fears are a result of wars, armed conflicts or repressive regimes.

By contrast, a migrant is a person who chooses to leave their country, whether for economic, educational or family reasons. While in many cases these migrants may be financially well-off and from stable countries, in some instances their personal circumstances at home may be extremely challenging, though not to the level that would qualify them for refugee status.

Under the 1951 Refugee Convention and its 1967 Protocol, in addition to other international agreements, refugees are protected under law and may not be returned to the countries from which they fled. By contrast, migrants require some type of immigration permission, typically obtained through visas or via international agreements.  States may remove migrants who lack valid permission or who have violated laws, but may not expel or return qualifying refugees.

As a result, governments and those with more protectionist and isolationist views tend to want to label many of those entering their country as migrants, rather than offer them the more robust protections of refugees, thus making them easier to remove.

Indeed, the UK was recently quick to dismiss the notion of joining an EU resettlement programme for refugees on the grounds that it would simply attract economic migrants who were taking advantage of international largesse. However, it is important to note that, according to the United Nations High Commission for Refugees, most of those individuals entering Europe claiming refugee status have in fact been refugees, while only a small percentage could be considered migrants.

While there may be disagreements as to who is a migrant and who is a refugee for the purposes of policy, severe problems arise when the terms are used interchangeably in common parlance. As former Labour Party leader Ed Miliband recently noted: ‘The real danger in the UK is that the debate about migration is, deliberately or otherwise, confused with the debate about refugees.’

One area where generalisations could have dramatic and long-term consequences is with regard to the UK’s upcoming referendum on membership of the EU, to be held by 2017. Bucking previous trends, a recent poll conducted by Survation found 51% of Britons would vote to give up membership to the EU, while only 49% would elect to stay were the vote held today.

This is problematic for a number of reasons. Setting aside the actual implications of a Brexit, the trend towards a ‘no’ vote raises concern because the surge in support seems to correlate with an increase in unease over migrants and refugees generally, rather than EU specific policies or issues. Indeed, a recent Economist/Ipsos MORI poll found that 56% of Brits view immigration as the most important issue facing the UK.

Though troubling, this should not come as a surprise, as certain elements in the media and politics have worked hard to fan the public’s growing worries and confusion over immigration, including the ‘migrant crisis’, by parking various issues under the same generalised and often intentionally inflammatory terms.

Nationalists and Eurosceptics in the UK have seized upon public fears about the influx of refugees in Europe, as well as frustrations with the record-high net migration figures domestically. However, many fail to mention that the two issues are unrelated and simply leaving the EU would likely have little impact on either.

First, refugees would be unaffected by a Brexit, as they are covered by other international agreements, including the 1951 Refugee Convention and its 1967 Protocol. Second, while leaving the EU would in theory enable the UK to stem free movement from within the EEA and Switzerland, many experts believe that in practice some sort of quasi-free movement agreement with the rest of Europe would be necessary in order to access the Single Market (in the same way that Norway and Switzerland made concessions and effectively adopted free movement in order to enjoy trade privileges).

This issue, however, is not the UK’s alone. There has been an increase in support across Europe for xenophobic, Eurosceptic right-wing groups like the Freedom Party in Austria  and the National Front in France, all of which have capitalised on frustrations, perceived or real, about immigrants and refugees, often blending the two together.

Consequently, there is a very real danger that when voters are asked whether the UK should remain in the EU they may believe that a Brexit will somehow help to solve all of these issues by reining in control over national borders and migration policies.  Clearly, an exit from the EU based on such a misunderstanding of the issues would be a significant mistake.

We face unprecedented times, and not just in the political arena. As conflict zones around the globe intensify, forcing millions out of their homes in search of safety; as climate change potentially pressures the world to re-examine the very definition of refugee; and as the UK’s improving economy continues to attract more migrants from the EU and overseas, the pace of the movement of people around the world is only likely to increase.

It is therefore imperative that we are deliberate in our use of language and cautious with how and where we use phrases like ‘migrant crisis’. Clearly, crises exist. But not all crises may be put under the same umbrella, and they certainly each warrant bespoke solutions from an informed electorate.

We must avoid the comfort of vague sensationalism, which sits in sharp contrast to the challenging and often prickly nuances of reality. When complex and distinct problems are reduced, conflated and confused, it is ultimately to the detriment of the public’s welfare and understanding of the issues.