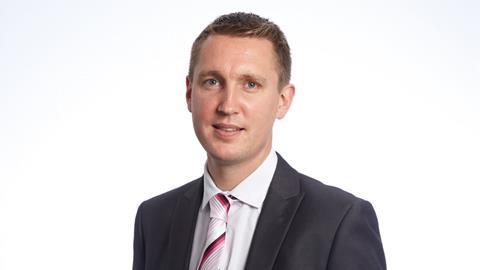 I moved into law because I am one of those annoying people who, if I am told something is as it is, then I need to know why. In my job, there is always a string of case law, a preamble to a bit of legislation, or something to explain not just what the law was, but why it was.

I trained at Anthony Gold, a wonderful niche firm in London. I was very fortunate to have my personal injury seat under David Marshall, president of the Association of Personal Injury Lawyers at the time. I therefore quickly learned to be comfortable around complex claims.

A few years after qualifying, I joined Thompsons. As a life-long supporter of the trade union movement, it was a natural fit – a firm that was all about standing up for the underdog and championing the rights of workers over the financial interest of big business. I instinctively knew what I didn’t want to do.

My life was not going to be about making rich people richer. Personal injury law is one of the few checks and balances on the excesses of our capitalist society and should not be taken for granted. There are a lot of challenges in personal and serious injury claims. Probably the biggest is sourcing a settlement for a client’s accommodation claims. The approach set out in Roberts v Johnstone [1989] QB 878 is simply broken in light of discount rates. How can it be fair that someone who has suffered catastrophic injury recovers absolutely nothing at all for the purchase price of suitable accommodation? Victims are being forced to borrow substantial funds from other parts of their claims, leaving them short of funds allocated for other essentials such as care or treatment.

Another challenge is managing serious injuries for a victim with a pre-existing drug or alcohol dependency who retains capacity despite their injuries. You cannot simply post a £100,000 interim payment cheque to these vulnerable clients. Such clients need to trust you to essentially protect them from themselves.

There is very little you can say to someone who has just been told  they will never walk again to make them feel better. But you can make them know that you care

In my experience, the most important part of any personal injury lawyer’s job is empathy. There is very little you can say to someone who just been told they will never walk again – or something equally horrendous – to make them feel better. However, there is plenty you can say and do to make them know you care and that you will do everything in your power to ensure they are properly compensated.

The personal injury sector has seen significant changes since I started my career. I joined the profession in the era of conditional fee agreements, when the sector was booming. However, for the last 10 years or so, the sector has been subjected to persistent and repeated attacks from the government, singing to the tune of their insurance industry paymasters. Now the industry is bracing itself for an unwarranted rise in the small claims limit, which threatens the core business of every personal injury firm. Perhaps even worse, though, is the media perception that all personal injury claims are motivated by greed, and that anyone can successfully pursue such a claim. I have had clients with serious brain and spinal cord injuries almost apologising for having to see me.

The sector needs rebalancing. Since its inception, it has been a battlefield between the protection of the individual versus the profits of Big Insurance. A good starting point would be the scrapping of the proposed small claim changes that, quite unsurprisingly, have already got off to disastrous start – especially in workplace claims – when there has never been any indication of a ‘compensation culture’.

I would also like to see the reporting of personal injury claims become more balanced. While there is no doubting the force for good that the media can be, highlighting the plight of the injured and raising awareness of significant legal issues, too many articles tend to simplify or ignore the severe impact an injury can have on a person’s life. I’ll never forget one of my own settlements that ended up being boiled down to ‘Birmingham teacher wins £100,000 after being injured breaking up a playground fight’. At no point in the article did it mention the catastrophic nature of my client’s injuries, the fact that she would never teach again, or that liability was admitted. Instead, you would presume she suffered nothing more than cuts and bruises. The impact that such reporting has on a client and their family can be almost as significant as the injuries themselves.