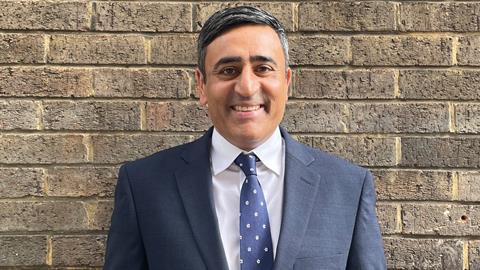 I grew up in north London and later moved to St Albans. I witnessed a friend who was black being falsely accused of attacking a police officer. It was a shocking moment, revealing to me as a young man that the police did not always behave properly. Being in London and often driving my dad’s BMW meant I was also stopped for no good reason. I learnt early to value justice and the principle of innocent until proven guilty.

After my LPC, I began as a paralegal earning £100 a week in a small high street firm in Lewisham. The interview took place in a pub in Brixton. I suspect being an Arsenal fan, as my soon-to-be boss was, helped. Interestingly, working in Greenwich and Camberwell during the late 1990s my boss, who was African-Caribbean, was the only senior partner around who was black. There were no black district judges or magistrates. Diversity is better now, certainly in London, but it has a long way to go. In 2008 I Joined MK Law, which then did just criminal law but opened a family department some years later. I became partner in 2009 and director in 2011.

I always wanted to specialise in criminal law, driven then, as now, to make sure everyone has a voice. I loved the variety of cases, from shoplifting to murder, no two days are the same. We are often characterised as ‘social workers of the law’ and there is a strong element of that. Less obvious is the psychology element; doing this job we see human nature at its worst and best.

'Seven members of staff have left for the CPS. I can’t blame them. Low rates of pay and low morale make keeping staff difficult and attracting new talent is hard'

The late 1990s were the heyday for legal aid – the fair representation of people accused of a crime was valued. We had more time to prepare cases, attending more courts. As a young lawyer, I never questioned whether I’d get paid properly and trusted I would. There was less admin and when everyone working in courts was not as overstretched there was a more collegiate atmosphere. Now, with everyone expected to do more for less, many people are leaving, no new trainees are joining and firms are closing. Morale is at rock bottom. It is not easy to win public sympathy when there is a cost-of- living crisis, but at every level criminal legal aid is in dire straits. It really is a struggle for survival. And a vital struggle for access to justice.

Being director of MK Law is massively challenging. As a firm we’ve risen to the challenge as much as possible by diversifying into actions against the police; and reducing our office space post-pandemic. Seven members of staff have left for the Crown Prosecution Service in a couple of years. I can’t blame them. Low rates of pay and low morale make keeping staff difficult and attracting new talent is hard. The burden of running a firm and dealing with Legal Aid Agency admin means less time as a lawyer. It is striking how tricky it is to find trainees. Every week about 20 CVs used to land in my inbox from young lawyers trying to start out. I can’t remember when that last happened. When the recent independent review by Christopher Bellamy QC found legal aid solicitors in ‘a parlous’ state, he was right.

The LCCSA hopes to persuade the government that without proper investment criminal defence solicitors are at risk of extinction. The MoJ must implement Bellamy’s recommendations. If the government is serious about clearing the court backlog an immediate injection of cash is needed. And a structured independent pay review – much like that for MPs – should be introduced to create a sustainable future. We’re only a few years away from a non-functioning system. There’s just time to right the balance between defence and prosecution or we’re into dangerous territory of widespread miscarriages of justice and legal advice deserts.

The Hatton Garden burglary case stands out as a memorable career moment. Just as I appeared on Sky News complaining about my client’s treatment (he was old and unwell), he was taken to hospital under armed guard. Often the moments I’ve learnt most from are the least expected. Like when, at the last minute, I took over defending in the high-profile murder case involving Nicholas van Hoogstraten (who was convicted of manslaughter, but found not guilty of murder). When my principal went on bereavement leave I had to take over instructing. My first appearance in Court 1 at the Old Bailey came with an hour’s notice. I was just a bit nervous! But the case which stays with me most wasn’t high-profile. A young black student, of good character, was accused of attacking a police officer. After a three-day trial he wasn’t just acquitted, he was paid £30,000 for police misconduct.