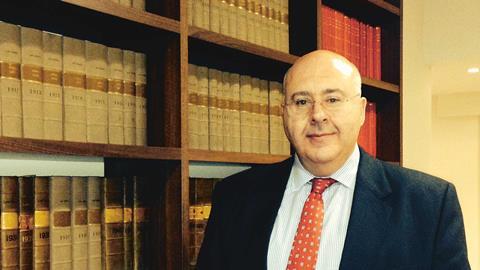 After I finished my economics degree, a nun suggested that I should become a barrister. With hindsight, she might have been saying, ‘I think you’ll make a bad economist’.

I grew up in Bermondsey. My father was a metal turner and my mother was a school dinner lady. I was the first person in my family to get an O-level or to go to university. In the early part of my career, I primarily undertook publicly funded work, but I wonder whether those from poor backgrounds would be able to do so now.

The best legal training I had was my pupillage with a wonderful man called James Kynoch, who, sadly, died some years ago. There could not have been better preparation for life at the bar.

I have been instructed in a broad spectrum of cases, both at first instance and on appeal. They have ranged from the appeals of the ‘Birmingham 6’, Judith Ward and Stefan Kiszko to prosecuting Diana, Princess of Wales’ butler and defending Levi Bellfield.

Since I took silk in 2002 (after 10 years as Treasury Counsel at the Central Criminal Court), I have continued to prosecute. But the greater part of my practice now is defending, particularly in cases of alleged fraud, and other financial and commercial crimes such as defending a BA director in the OFT prosecution (alleging price-fixing) under the Enterprise Act; representing individuals/companies suspected/accused of Libor rigging, insider-dealing, bribery and corruption, and so on. Breadth of vision is sometimes as important as intense focus.

There has been a liberalisation in the admissibility of hearsay evidence. I have always been rather mistrustful of hearsay evidence regarding its reliability; reinforced by the fact that, for the first 20 years of my practice, hearsay was usually excluded by the criminal courts on the basis of its unreliability. Then the government decreed that this established position should change overnight – I am not sure hearsay is as reliable as the legislature would have us accept.

The hardest sort of client is one who is so overborne by their plight that they start to become dysfunctional. It is then essential to work with their solicitors to provide to the client sufficient and necessary support to enable them properly to advance their best interests.

Solicitors I have had the good fortune to be instructed by, and work with, have always worked extremely hard, and contributed enormously to the conduct of the case. Those who have been publicly funded have often been under-resourced, and have had to make significant personal/professional financial sacrifices to fulfil their responsibilities to the very high standards they set for themselves. The strain on them is enormous. A properly-funded legal system really is very important, and funding is in crisis at the moment.

Despite the cuts in public funding, a career in the law can be very rewarding. It can pay well. I have never been bored. I enjoy going to work every day. I meet interesting people. I am instructed in fascinating cases; the greater the demands and difficulties of the case, the greater the satisfaction in doing the case well.

The market for lawyers is ruthless, relentless and chillingly efficient at culling those who either lack merit or, almost as important, those who lack luck. The market will determine if there are too many lawyers.