I started out in journalism as I love a good story. It was fun but did not quite hit the spot. This coincided with my being offered a university scholarship. I had planned to do an arts degree but my father said ‘if you are not going to do a proper degree don’t do one at all’, which meant medicine, accountancy or law. As I could not stand the sight of blood, and numbers left me cold, we compromised on law. 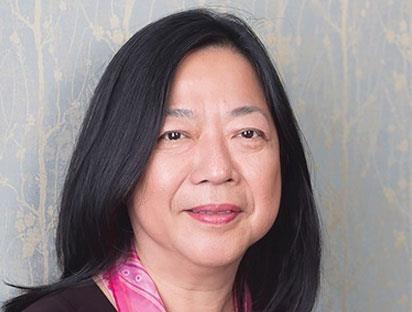 Although the National University of Singapore was not on the world map then, the law course was rigorous. For example, we had to memorise the entire White Book as it was not allowed in the exam hall for our finals. Although painful at the time, this proved very handy when I began practising, as I never needed to look up the index and was able to impress my colleagues with nerdy White Book trivia.

After qualifying in Singapore, I joined Freshfields and was sent to London for training. I was planning to go home to practise but fate intervened – I found my husband at Freshfields. When we announced our engagement, I left to join Clyde & Co. It was then a much smaller firm but I was impressed with the depth of its international reach and laissez-faire attitude. Those were the days before it became such a long and arduous journey to partnership – and before I even thought of it, Clydes offered me partnership, conditional only on my qualifying in England. Not a difficult offer to accept, even though it meant becoming a trainee again.

As a former colony, Singapore inherited English law so adapting to practise in London is not difficult, except that the Singapore legal profession is fused – we are both advocates and solicitors. I have sometimes found it difficult to keep to the boundaries between the solicitor’s role and the barrister’s role but, happily, very few barristers have objected to my interfering ways over the years.

I have acted in disputes involving claims against sovereign states, both in courts and arbitration. It is certainly not a level playing field. A state has privileges and powers that ordinary litigants do not, such as deep pockets and state machinery which can be used to crush an opponent internationally. As courts of friendly nations are understandably reluctant to criticise the actions of another state, a key challenge is to convince the English court that it can, and should, come to my client’s aid when he is being victimised by his own state and cannot get justice from the local courts.

This is a big ask and success is rare but not impossible, as demonstrated by two cases I have been involved in – the Yukos and Boreh cases. They had similarities – a powerful man falls out with the regime in his state and finds himself convicted in the local courts of serious crimes such as tax evasion, fraud and, in Boreh’s case, terrorism too. Exposing the lack of substance to these convictions required cogent evidence – another major challenge when litigating against a state. Potential witnesses refused to assist for fear of reprisals and hard documentary evidence was hard to come by.

I have had a few career highlights but recent ones have been about shining a light on what sovereign states can do when they are out to ‘get’ someone. First, there was the Yukos case where a public falling out between president Putin and Yukos CEO Mikhail Khodorkovsky was followed by the court-approved destruction of Yukos and lengthy imprisonment of Mr Khodorkovsky for alleged tax crimes. We successfully persuaded the English court of a politically motivated campaign against Yukos and its management. Then there was the successful defence of businessman Abdourahman Boreh against Djibouti after his falling out with president Guelleh.

I would like to see, in complex commercial litigation and arbitration, less time and money spent on fundamentally bad points for tactical reasons where the stakes are high. There seems to me to be a marked increase of aggressive tactics and wholly disproportionate correspondence. This is expensive and often counter-productive. I recall that in the 1980s the Commercial Court issued guidance calling for an end to this conduct, and required each City firm to appoint a specific partner whose role was to handle complaints and deal with offenders. It did work – inter-solicitor behaviour improved and the judge was spared shouty correspondence which added nothing to the merits.