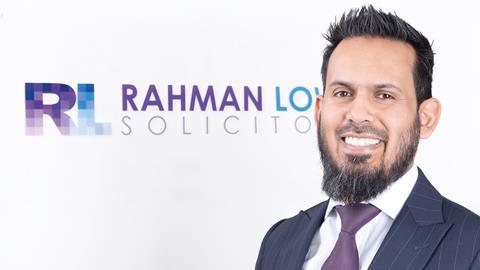 Having completed my law degree in 2001, I took a year out because I did not have the funds to pay for the Legal Practice Course. I had already incurred debt from my time at university and did not want to increase this. I worked as a paralegal; the wages were too low to save enough to enrol on the course to complete the LPC the following year.

I did not come from a privileged background. My father passed away when I was nine, and my mother, a housewife, raised six of us by herself. One day I went to my local library and consulted the charities register and noted down the names of various charitable organisations that provided educational grants. I wrote to hundreds, many of which did not respond. In the meantime, the deadline for booking a place for the LPC was looming – the fee was £8,000 and a £250 deposit was required to book a place. I paid the deposit, not knowing how I was going to obtain the remainder. However, just as buses arrive at once, I received multiple positive replies from different organisations. Some contributed as little as £200, others £1,000, with £4,000 in total. I also applied for the Law Society’s bursary scheme, resulting in a further £4,000. I had managed to raise the entire LPC course fee to complete the booking, and the rest, as they say, is history.

I secured a training contract in 2005 at national law firm Thompsons Solicitors. It was a brilliant place to train, with so many great lawyers to learn from. I specialised in employment/discrimination law. From very early on I was delving into complex discrimination and whistleblowing claims, unlike at other firms where at that stage you may have been dealing with more straightforward cases.

After more than 11 years at Thompsons, I joined Rahman Lowe Solicitors – a niche employment practice. While I still specialise in employment/discrimination law, I have developed the firm’s defamation and reputation management practice. Over the past two years we have achieved excellent results for our clients in complex claims against all the major media outlets/publications. It is a complex area of law, and claimants have found it more difficult since the changes introduced by the Defamation Act 2013, which added an extra hurdle to establishing ‘serious harm’. Further changes in 2019 to the costs regime meant that success fees in defamation claims were scrapped, and as a result fewer firms are willing to take cases on a ‘no win, no fee’ basis.

Defamation claims are topical, as we have seen with the high-profile cases of Johnny Depp, Harry and Megan, and Ash Sarkar against Julie Burchill, which we were involved with. We successfully pursued a claim for defamation and harassment under the Protection of Harassment Act 1997 (PHA 1997). The PHA 1997 is an underused piece of legislation and this case highlights the importance of its use in an age where we are likely to see an increase in Twitter spats/libel cases. The case was widely publicised because it involved a number of wider contemporary issues including racism, Islamophobia and misogyny.

Rahman Lowe has also been involved in a number of high-profile employment cases, including the ongoing whistleblowing claim of Dr Chris Day, which is funded through CrowdJustice. The platform is an amazing concept in allowing ordinary people the opportunity to pursue claims that are of considerable public interest, with the support of the public. I expect to see its use increase in the coming years.

Before treading the path to a career in law, Malcolm X was a noteworthy role model. Although not a lawyer, he was a great orator and forensic debater who aspired to be a lawyer but was discouraged by his schoolteacher because of her own racial prejudices, advising him instead to think about a ‘realistic’ career as a carpenter. My mother also continues to be a source of inspiration through her experiences, strength and courage.

I would cite the Ash Sarkar case as the personal highlight of my career. Not only was I able to defend the reputation of my client and help her achieve a fantastic result, I was also able to act in support of Prophet Muhammad in the process, who remains my ultimate role model in all aspects of my life.