The confidential address of a victim of attempted murder was ‘inappropriately given’ to the perpetrator during a court case, the Ministry of Justice has revealed in its annual report.

The error, which took place last December, is one of five ‘data incidents’ in the year to 31 March 2021 involving domestic violence or safeguarding concerns in which an individual’s name or address was wrongly disclosed, potentially affecting a dozen people.

There are a total of 16 data incidents recorded in the MoJ’s annual report and accounts which potentially impacted nearly 5,500 people – more than 5,000 of whom relate to inaccurate changes to plea data as a result of an IT problem, which was first revealed in HM Courts and Tribunal Service’s annual report in July.

Around 25 staff at HM Prison and Probation Service were potentially affected in March when their vaccination status data was ‘stolen from a third party occupational health provider staff member following a vehicle break in’. The MoJ said the data was returned to HMPPS. 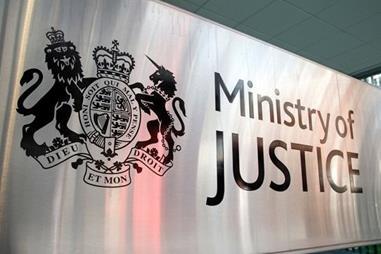 Another 72 people may have been affected when a member of staff ‘inappropriately accessed and took screenshots’ of the prison computer system in June, while the previous month 62 individuals’ tribunal documents were sent to one individual due to ‘an error at a third party bulk scanning facility’. In those three cases, Information Commissioner’s Office (ICO) took no further action.

All 16 data incidents were referred to the ICO which is continuing to look into four incidents, including one in February when adoption paperwork in ‘a step-parent adoption case’ wrongly being sent to the birth father, in a case with domestic violence and safeguarding concerns.

An investigation into a medical report regarding gender re-assignment which was wrongly included in medical records as part of an individual’s tribunal case involving the Criminal Injuries Compensation Authority led to a decision that no formal action was required, the ICO said.

A spokesperson for the MoJ said: ‘We handle millions of pieces of sensitive data safely and securely every year. While errors and data breaches are extremely rare, we have introduced extra training and safeguards to ensure data is handled safely.’