Geoffrey Cox QC put himself in the frame to lead Boris Johnson’s commission on reforming the judiciary ahead of his widely expected sacking as attorney general last Thursday.

Speaking at an Institute for Government event, Cox said future candidates for appointment to the Supreme Court bench might have to answer questions before a joint committee of both houses of parliament. He also sought to calm speculation following the latest spat between judges and the prime minister, triggered by an appeal court ruling preventing deportations to Jamaica. 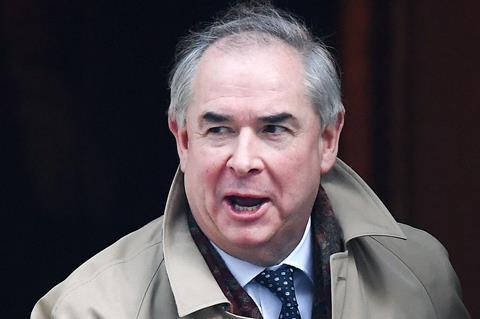 The government is in ‘no headlong rush’ to curtail judicial independence, Cox said. While the idea of politically appointed judges was ‘completely off the table’, he added: ‘I think there is a case for looking at how Supreme Court judges are appointed. One possibility could be for the UK to emulate Canada in requiring candidates to appear before a parliamentary committee.’

Such a procedure might be examined by the Constitution, Democracy and Rights Commission announced in last month’s Queen’s speech, Cox said. However reform ‘will require careful examination – measured, calibrated examination. There will be no rush, headlong, into impetuous reform. It will have to be examined quite carefully to see what are the proper contours and the proper balance between those who are elected decision-makers and those who are not,’ he added.

Cox was replaced as AG by barrister Suella Braverman MP, who last month called for politicians to take back control from ‘unelected, unaccountable’ judges.

On his departure as AG Cox, who became Whitehall’s senior law officer in July 2018, posted a letter to the PM on Twitter. He said: ‘Good work has been done to lay the foundations for appropriate review of the workings of the criminal justice system, to take a firm grip of the problem of disclosure, to equip the CPS with the means to perform its essential functions and, in introducing new governance frameworks, to enable more effective superintendence of both the CPS and SFO.’