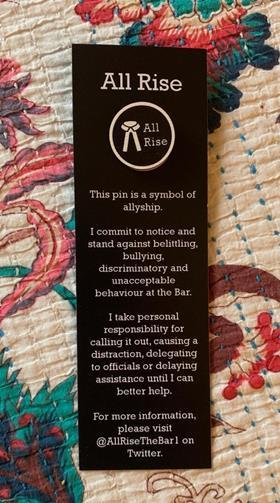 The badge is designed to deter inappropriate behaviour in the profession

A group of barristers has produced a badge to tackle bullying and sexual harassment in the law, securing the support of senior judges, QCs and solicitor advocates.

The ‘All Rise’ pin badge is designed to be worn in chambers, offices and at court as a ‘symbol of allyship’ and to deter inappropriate behaviour. The initiative is headed by four barristers – Bo Kay Fung, Chris Gutteridge, Lydia Pemberton, and Morayo Fagborun Bennett – and has so far raised £1,300, which will go towards manufacturing the badges.

Commenting on the campaign, Gutteridge said: ‘There have been a number of decisions handed down by bar disciplinary tribunals in recent months concerning sexual assault and harassment by barristers. The details of one of those cases suggested that the offending barrister acted in the presence of other barristers without fear of repercussions... This is, in a word, appalling. It casts a shadow over the whole profession.’

Gutteridge told the Gazette that the project has now expanded to cover other forms of bullying and discrimination, ‘particularly the “small stuff”. 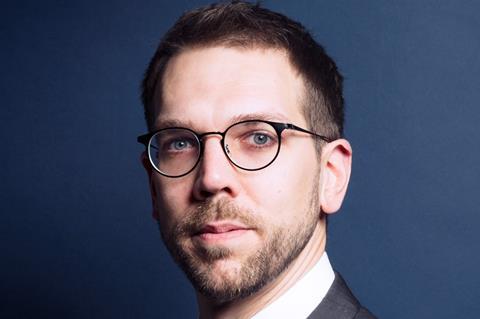 Gutteridge: project has expanded to cover the 'small stuff'

‘I would like to think that most barristers, if they saw someone being overtly bullying, or overtly racist or sexist, would say something. But beneath that level of misconduct there are lots of minor slights that can go under the radar unless you are the person on the receiving end of it, in which case it can be traumatic.’

‘We’re hoping that having this as a sign will be - number one - a deterrent to any potential bad behaviour and - number two - will create a network of supporters or, to coin a phrase, active bystanders’.

All Rise aims to raise £5,000 in order to produce enough pins for around a quarter of barristers in England and Wales.