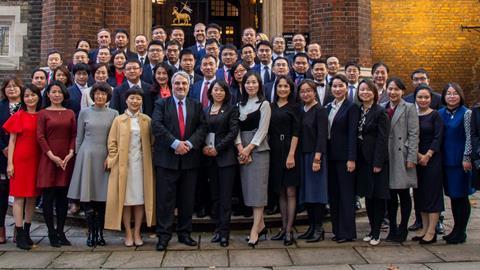 Senior Chinese lawyers have travelled to the UK to learn about international arbitration and take part in debates with English lawyers, in order to keep up with a ‘rapidly expanding’ Chinese legal system.

Funded by the Chinese government, the All-China Lawyers Association (ACLA) sent 50 senior lawyers to the University of Law for a 16-day programme on international arbitration, only the second of its kind.

According to the university, delegates received expert tuition, participated in mock moots, and took part in debates with English colleagues on legal challenges facing Chinese companies who invest overseas. They also went on field trips to chambers and firms in order to learn more about the common law system.

Last year China announced the China International Commercial Court, an institution for resolving cross-border commercial disputes. In December 2018 the court, which has bases in Xi’an and Shenzhen, received its first cases.

The new commercial court is an attempt by China to build the credibility of its legal system in an increasingly competitive market.

Commenting on the arbitration programme, Vassilis Konstantinou, international pro vice-chancellor at the University of Law said: ‘The Chinese legal sector is expanding rapidly, and the ACLA is playing an instrumental role to providing the much needed training and upskilling to its members.

'We feel privileged to work with ACLA to support their training programme. True to its heritage, ULaw is proud to promote English law by working with colleagues across many jurisdictions, and contribute to the training of the ever-changing and expanding the international commercial legal sector.'

Delegates said they were impressed by the openness of the UK’s legal sector for international collaborations.