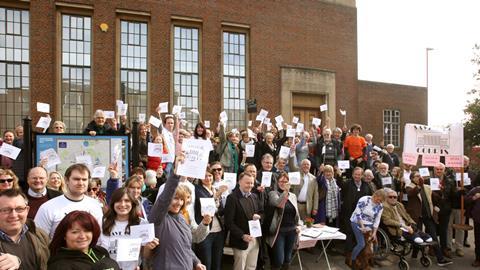 Court campaigners refuse to give up fight against closure

Campaigners fighting to keep Chichester Combined Court Centre open have vowed they will not give up – despite the government’s confirmation of closure.

More than 200 people attended a protest outside the building earlier this month and discussions have started on a potential legal challenge.

The Ministry of Justice has said the building is in poor condition and requires significant investment. Work will be transferred primarily to Worthing.

Chichester MP Andrew Tyrie, in a letter to the MoJ, said the decision was ‘wholly unacceptable’ and not backed up by economic evidence. The county and district councils also oppose closure.

Tyrie said the consultation response was ambiguous about which, if any, of the facilities in Chichester was being retained.

‘The Ministry of Justice’s response is not reasonable. Nor is it adequately explained. Frankly, it is a shambles.’

Closure of the building would leave West Sussex as one of only two counties – and certainly the most populated – without a crown court.

The county council said it had responded ‘fully and forcefully’ to the MoJ consultation.

‘This will mean longer waiting times and further distances to travel to access courts and will add considerably to the cost and effort of getting access to justice,’ added a council spokesman.

Senior councillors met last week with two retired circuit judges with a view to a coordinated appeal against closure. A public meeting could be held in the coming weeks to organise support.

The government has already admitted to giving an inaccurate usage figure in its impact assessment for Chichester Combined Court, previously thought to be the busiest court earmarked for closure.

In a response to a freedom of information request from the Gazette last year, the MoJ said usage for 2014/15 was 60% and not the 78% stated initially. Campaigners to save the court have suggested usage is actually much nearer the 92% recorded five years ago.

HMCTS says it will seek to identify alternative arrangements for dealing with county court and family court hearings, or provide video links from alternative venues in Chichester.

Its response acknowledged that some people will need to travel further to court, particularly those using public transport, but said arrangements will be made to relocate cases in closer Horsham and Brighton, where appropriate.

Advances in technology, the response said, should mean fewer people will need to physically attend court.

A total of 62 responses to the consultation proposal for Chichester were received, of which one was in support of closure.