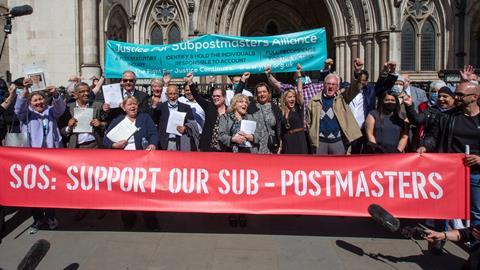 A senior lawyer for the Post Office talked of dissuading accused postmasters from jumping on the 'bandwagon’ of attacking the Horizon computer system, it has emerged.

In a 92-page judgment in Hamilton & Others v Post Office Limited, the Court of Appeal quashed the convictions of 39 former postmasters after they were wrongly found to have stolen money from the Post Office. Some of those convicted went to prison, lost their homes and were shunned by their communities. Three of those wrongly convicted have not lived to see the outcome of their appeals.

The convictions were based on the faulty Horizon computer system installed in Post Office branches, and the judgment sets out efforts made before and after the prosecutions to discredit any attempt to criticise the technology.

In his ruling, Lord Justice Holroyde revealed that the court had been shown previously unseen material by the Post Office. These documents showed that, after the prosecutions, a barrister employed by a firm of solicitors instructed by the Post Office had questioned statements from an expert witness, saying there was nothing wrong with Horizon.

Holroyde LJ said the documents suggested a culture of ‘seeking to avoid legal obligations when fulfilment of those obligations would be inconvenient and/or costly’.

Further documents revealed that in 2010 a senior lawyer in the Post Office’s criminal law division reported the successful prosecution of Seema Misra. He said they had been able to ‘destroy’ her attack on the Horizon system and ended the memorandum by hoping ‘the case will set a marker to dissuade other defendants from jumping on the Horizon bashing bandwagon’. Another attendance note expressed fear that any missed conviction could bring the Royal Mail system down, and reported counsel’s concern that ‘juries still believe in conspiracies’.

In relation to a different prosecution, a legal executive sent a memo admitting he had not mentioned Misra’s case to defence solicitors, saying: ‘They can find that out for themselves’.

Holroyde LJ said the Post Office knew there were serious issues with the system but ‘consistently asserted that Horizon was robust and reliable’.

In a statement ahead of Friday’s ruling, a Post Office spokesperson said: “We sincerely apologise to the postmasters affected by our historical failures.

“Throughout this appeals process we have supported the quashing of the overwhelming majority of these convictions and the judgment tomorrow will be an important milestone in addressing the past.”