The Ministry of Justice has been criticised by MPs for washing its hands of crumbling courts and tribunals without giving any thought to how the dilapidated buildings are harming the environment, high streets and town centres, and putting local authorities under additional financial strain.

In a report published today, the Commons environmental audit committee said it was concerned that the ministry does not know which courts and tribunals fall in conservation areas and that the department does not monitor the condition of buildings it has sold. 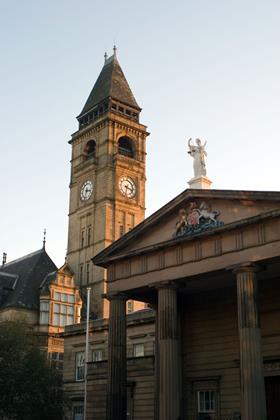 The committee says derelict buildings 'pose risks to society and impact negatively on high streets and town centres, and local authorities which are already stretched for finances have had to step in to rectify the situation'. The report cites Wakefield Crown Court, which 'has been left to fall into ruins since it was sold, and which has required significant financial investment from Wakefield Council to rectify the situation'.

The former Crown Court is a grade II* listed building and the oldest civic structure in Wakefield's Wood Street. Its severe deterioration resulted in the building being placed on Historic England's 'at risk' register in 2013.

A Ministry of Justice spokesperson said today: 'The department takes its environmental responsibilities very seriously and we welcome this report. We are working hard to address the recommendations of the report and we will provide a formal response in due course.'

The ministry says it has been working with organisations such as Historic England to ensure its plans to maintain heritage buildings are compliant with relevant guidance. When a building is to be sold, HMCTS commissions a marketing and valuation report, which provides information on heritage including whether a site is listed or located in a conservation area. If a site contains a listed building or is in a conservation area, HMCTS requires prospective purchasers to prove they have previously worked on listed sites, confirm they have read and understood the heritage information and planning guidance for the property, and have a development proposal in accordance with planning guidance.