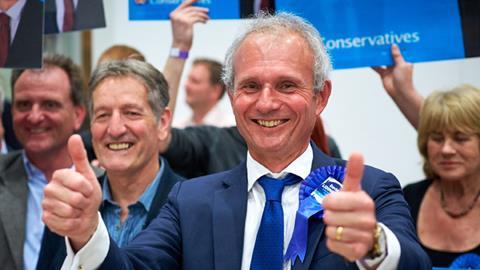 David Lidington, longstanding former Europe minister and leader of the Commons since last July, is the new lord chancellor and justice secretary.

Predecessor Liz Truss has been made chief secretary to The Treasury, a move widely seen as a demotion because she will no longer be a full member of the Cabinet. Truss was fiercely criticised for her seemingly lacklustre defence of a judiciary dubbed ’Enemies of the People’ by the right-wing press over the Article 50 case.

Jeremy Wright has been reappointed attorney-general.

The appointments were announced this afternoon as Prime Minister Theresa May completed her post-election cabinet reshuffle.

Like his three immediate predecessors, Lidington, 60, is not a lawyer. A history graduate, Lidington took as the subject of his PhD thesis ’the enforcement of the penal statutes at the court of the Exchequer c.1558-c.1576’.

Educated at the public school Haberdashers’ Aske’s and Cambridge University, Lidington was elected MP for Aylesbury in 1992. He was Europe minister from 2010 until July 2016, in which post he fiercely opposed Brexit. He was appointed leader of the commons and lord president of the council last July.

Outside politics, Lidington worked for BP and Rio Tinto–Zinc Corporation before spending three years as special advisor to Douglas Hurd in the Home Office and Foreign Office.

The website TheyWorkForYou shows Lidington has generally voted against laws to promote equality and human rights. In May last year he voted in favour of repealing the Human Rights Act 1998. He has also consistently voted against allowing terminally ill people to be given assistance to end their life.

Lidington has also consistently voted in favour of restricting the scope of legal aid, and for allowing national security-sensitive evidence to be put before courts in secret sessions.

He has always voted when present in favour of limits on success fees paid to lawyers in no-win no fee cases - perhaps suggesting he will forge ahead with the personal injury reforms contained in the prisons and courts legislation aborted by the general election.

His voting record also shows support for stronger enforcement of immigration rules and mass surveillance of people’s communications and activities.

On the vexed subject of judicial independence, lawyers will be relieved that Lidington is not an unknown quantity. In the commons last December, he rejected a Tory MP’s call for parliament to approve judicial appointments, stating: ’I hope that we don’t go down the route in this country where political considerations play a part in the appointment of judges.

’And of course our current system does depend on a balance, embodied in numerous conventions over the years rather than written into law, that parliament, government, respect each other’s place in our constitutional settlement and I hope very much that that will always continue to be the case.’

Though generally perceived as low-profile, Lidington has occasionally become embroiled in controversy. He was made a CBE in David Cameron’s widely criticised resignation honours list.

In May 2009, it was revealed he had claimed £1,300 on expenses for dry cleaning. He also claimed for toothpaste, shower gel, body spray and vitamin supplements on his second home allowance. He repaid the claims for the toiletries, saying: ’I accept that many people would see them as over-generous.’

Commenting later on Sunday, Lidington said: ’I am pleased and honoured to have been appointed as Lord Chancellor and Secretary of State for Justice.

’Together with my ministerial team, I look forward to working with the hardworking and dedicated staff in our prisons and probation services, in our courts and tribunals and with people right across the justice system.

’Democracy and freedom are built on the rule of law, and are protected by a strong and independent judiciary. I look forward to taking my Oath as Lord Chancellor, and to working with the Lord Chief Justice and his fellow judges in the months ahead, to ensure that justice is fairly administered and robustly defended.’

In a message of congratulations, Law Society president Robert Bourns said: ’The United Kingdom has a long and distinguished history as a nation governed by the rule of law, and the lord chancellor has a vital duty in upholding this. David Lidington takes on this important role at a time which holds both huge opportunities and huge challenges for the 380,000 people working across our legal sector.

’We look forward to working together with the new lord chancellor to help our legal profession continue to go from strength to strength.’