A former solicitor with international firm DWF today alleged that his progress in the business was obstructed because his wife had a debilitating illness. James Perry, who spent nine years with the firm before leaving last October, alleges he was discriminated against, the Leeds employment tribunal heard.

Perry had been promoted twice in quick succession to the positions of associate solicitor and then technical director by 2014, but said he was then consistently given ‘delivers’ rather than ‘exceeds’ ratings in performance reviews. He said he should have been made associate partner as colleagues had been and was also constantly denied bonuses. He alleges his treatment was the result of the fact that his wife has muscular dystrophy.

The tribunal heard that there are recordings of conversations – not played yet during proceedings – which Perry said showed the ‘venomous way’ in which he was spoken to. He further alleged there was a ‘bullying culture’ which came out from listening to the tapes.

During cross-examination Joanne Connolly, for DWF, said Parry was ‘at best a contributor’ to meeting team-wide billing targets and questioned why he believed he was automatically entitled to the same progression as colleagues. ‘You have to earn the progression – it doesn’t come as of right by time served,’ said Connolly. 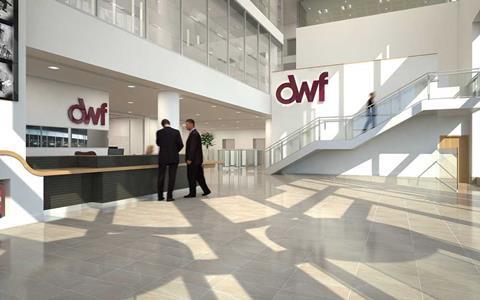 Perry responded: ‘It depends if the handling of your progression has been mismanaged in some way. I was supposed to be [in a higher position] in three to five years and that has not happened for me.’

Connolly said Perry started to adopt an attitude around 2017 that he would not do any more work unless he was paid more, to which he replied: ‘Absolutely not.’ Referring to a diary extract disclosed to the tribunal, Connolly said: 'You were not coping well with your existing workload, still less performing at the level to be promoted.’ This extract included Perry saying he was 'floundering' and that his situation was 'f***ing hopeless' at the time.

'You are not knocking on the door of promotion. You are struggling to cope and blaming others for that,' Connolly said. Perry responded that this was an 'isolated document' and that he was leading the recoveries team successfully.

Employment Judge Lancaster said Perry was required to prove a link between the decision-making of his former firm and his wife’s disability. He told the claimant: ‘It doesn’t matter if you think [your treatment] is harsh or unfair.’