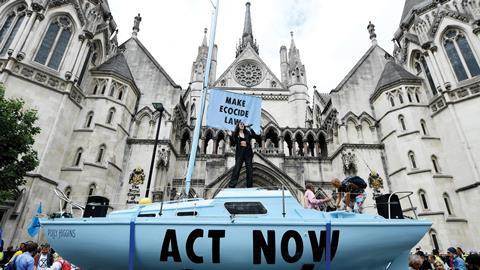 Extinction Rebellion activists are expected to target City law firms in a wave of protests in London over the next two weeks.

The campaign group told the Gazette that protesters will focus on legal services, financial services and insurance services, which have made a ‘real contribution to the crisis’. They have not disclosed any specific plans, however.

A spokesperson for Extinction Rebellion said the City of London is the ‘arch-financier’ of the carbon economy and is ‘knowingly investing in the destruction of the conditions which make the planet habitable’.

‘It supports 15% of global carbon emissions around the world. It hosts BP, Shell, Glencore, Anglo-American and Russian Oil and Gas companies such as Gazprom and Rosneft. The world’s largest energy company Saudi Aramco raised $12bn via UK debt-markets. These deals are supported by our top City law-firms and our insurance industry, the critical enablers of the carbon economy.’

Yesterday, protesters built a 4m tall table near Leicester Square as part of its fifth mass protest to demand the government stops using fossil fuels. Thousands of people gathered in Trafalgar Square earlier in the day for an ‘opening ceremony’.

According to an update from the Metropolitan Police, eight arrests were made yesterday and 10 were made on Sunday.

Last February, magic circle firm Slaughter and May was targeted by environmental campaigners in protest at its advice to fossil fuel companies, including Premier Oil. Lawyers for Extinction Rebellion staged a ‘crime scene’ as part of a peaceful protest outside the firm’s Moorgate office.

Meanwhile, in October 2019, Lawyers for Extinction Rebellion gathered outside the Royal Courts of Justice and handed out ‘declarations of rebellion’, with one campaigner was dressed in gold as ‘Lady Justice’. Earlier that year, the campaigners parked a blue boat outside the main entrance of the Royal Courts of Justice, emblazoned with the words 'act now’.