Campaign group Justice has run an experimental fully remote jury trial to test whether it could be a fair alternative to face-to-face hearings during the coronavirus lockdown.

In the experimental trial, the volunteer participants appeared from different physical locations and dealt with a fictional case of a man charged with wounding.

A preliminary evaluation by Professor Linda Mulcahy of Oxford University and Dr Emma Rowden from Oxford Brookes University found ‘much that worked well’. Describing a ‘success for open justice’, they said the videolink had a ‘positive impact on “sightlines” in the trial’ which, unlike in a physical court, meant all parties could see each other ‘very clearly and were accorded equal visual status’. 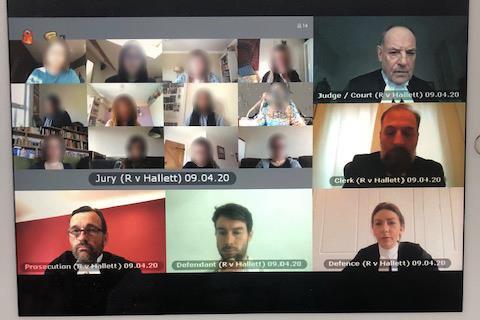 They found the defendant ‘was treated with much more dignity than when they are placed in an enclosed dock’ in a courtroom.

However they pointed to ‘numerous technical problems’ including jurors disappearing from screen, which they warned could be the subject of an appeal in an actual trial.

The researchers noted that the virtual trial placed ‘a huge amount of trust’ in the jurors, who were instructed to locate themselves alone in private rooms, to comply with their legal responsibilities during the trial.

They suggested the judge could make an opening statement indicating how it is different from a physical trial, but that the rules are the same, with photography and recording forbidden.

To minimise distraction and avoid informality, the report suggested standardising the background environments and degree to which each person’s face and torso was in shot, and putting a coat of arms behind the judge.

Jodie Blackstock, legal director at Justice, said: ‘Our primary concerns are for the safe administration of justice, upholding fair trial rights and effective participation. We are continuing to test whether remote jury trials are possible, refining the platform and addressing concerns raised in the evaluation process.’

Even if the technology exists to enable remote jury trials, the legal profession is divided on whether they are desirable. Before the crisis halted trials, the backlog of Crown court cases had risen to almost 33,000, due to budget cuts that reduced the number of sitting days.