A young woman who was homeless while taking the Legal Practice Course (LPC) has secured a training contract at a firm with offices in London and Brighton.

April Britton, 22, was studying for the LPC in Bristol at BPP University when she began sleeping in her car after a breakdown in family relations. 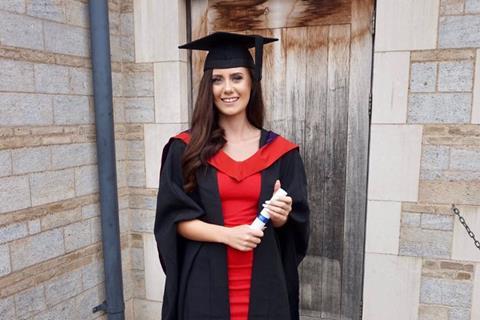 April Britton, who slept in her car during the LPC, will begin her training contract in October

Britton originally stayed in hotels and Airbnbs. However, ‘the costs really racked up’ and she ended up paying £15 a night to stay in ‘crack houses’. She then spent three months sleeping in her car.

Britton said: ‘I was sleeping in my car and trying to revise. All my books and folders were in my car. I had revision notes stuck up on my windows. I would go into McDonalds or Caffè Nero to brush my teeth before classes. I kept the whole thing a secret. I was a bit ashamed, a bit embarrassed.’

She added: ‘I lost a lot of weight because I wasn’t eating properly – I got down to about six and a half stone.’

Britton, who studied Law at Canterbury Christ Church University and achieved an A and two Bs at A Level, eventually told a tutor at BPP about her situation. The university put her in touch with homeless shelters and recommended she take a break from her studies.

Britton said: ‘It was just so challenging. You start to question whether you want to be a lawyer.’

However, Britton is now renting a flat and working as a paralegal at Britton & Time Solicitors in Brighton, where she will begin a training contract in October. The firm’s director Paul Britton – to whom she is not related – offered to interview her as she had done work experience at his previous firm.

April Britton said: ‘I am really grateful that he values my determination and hard work. He has given me a chance to make something of myself and prove that I will be a great lawyer.’

Britton will finish the final stage of the LPC in January.