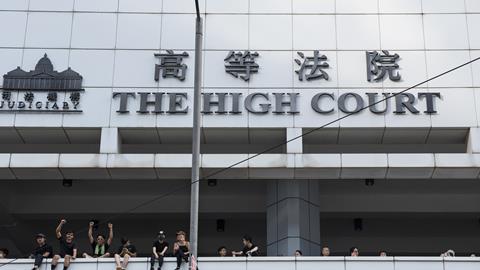 Legal organisations in Hong Kong have condemned protesters who reportedly threw petrol bombs at two of the city’s major court buildings after a peaceful pro-democracy march, saying they are ‘not genuine protesters but criminals’.

The Law Society of Hong Kong and the Hong Kong Bar Association denounced damage to the Court of Final Appeal and the High Court after reports in the South China Morning Post.

Hong Kong’s Law Society expressed ‘grave concern’ about the incident, stating: ‘Venting dissatisfaction by throwing petrol bombs at court buildings and vandalising property must be abhorred. Those who committed these criminal acts must stop taking the law into their own hands. These acts will not help resolve any problem.’

It added that ‘the rule of law is one of the greatest strengths of Hong Kong’.

The region’s bar association said it ‘deplores in the strongest possible terms the acts of arson and vandalism’, adding: ‘People who commit such acts are not genuine protesters but criminals. They must be brought to justice. Their acts cannot be defended or justified in any manner whatsoever, and were not committed in the exercise of any rights in a civilized society governed by the rule of law.’

On Sunday hundreds of thousands of people marched peacefully through the centre of Hong Kong in the biggest pro-democracy demonstration in recent months.