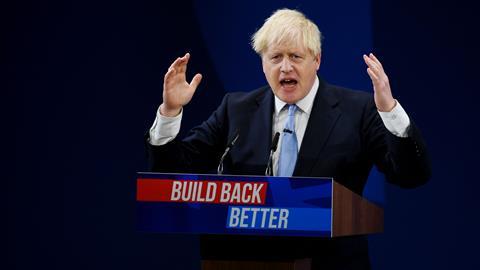 The prime minister continued his anti-lawyer rhetoric in a much awaited speech to the Conservative party conference that is likely to enrage the legal profession.

Addressing the conference in Manchester this morning, Boris Johnson said levelling up meant fighting crime, including putting more police out on the beat and toughening up sentences.

He said: ‘What I found most incredible of all was the decision by Labour now led by lefty Islington lawyers to vote against tougher sentences for serious sexual and violent offenders. And on behalf of the government I tell you we will not rest until we have increased the successful prosecutions for rape, because too many lying bullying cowardly men are using the law’s delay to get away with violence against women, and we cannot and will not stand for it.’

During his speech he also mentioned that he 'read a learned article by some lawyer saying we should not bother about pet theft. Well I say to Cruella de Vil QC - if you can steal a dog or a cat then there is frankly no limit to your depravity.'