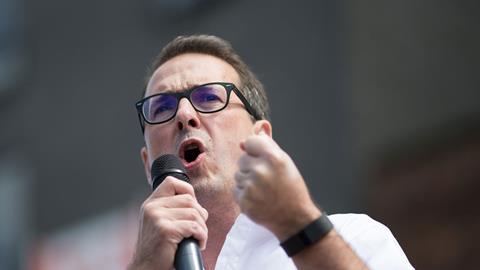 Smith (pictured) says he wants to ‘restore access to justice’ by scrapping the fees, which came into force in 2013.

The Pontypridd MP reached out directly to workers – many of whom are being consulted by trade unions about who they should support – in a series of pledges today.

‘At the core of my radical vision for Labour’s future is a commitment to making tackling inequality the focus of everything our party does,’ Smith said.

‘This simply can’t be achieved without fairness in the workplace and to make this a reality we need nothing short of a revolution in workers’ rights. Delivering that requires more than just rhetoric, it needs a credible plan.’

Smith has also said he would enhance the definition of ‘worker’ to strengthen rights, restore civil liability for breach of health and safety regulations, and bring back health and safety protection for self-employed workers.

The position is more clear-cut than Labour’s stance prior to the 2015 general election, when the party pledged to abolish the employment tribunal system, but was unclear about whether it would retain fees.

The introduction of issue fees and hearing fees for claimants in employment tribunals in July 2013 has led to a drop of almost 70% in the number of cases brought. The government is still sitting on a review due to be published at the end of 2015.

Former justice minister Dominic Raab apologised for the delay last month but could only say publication will be ‘as soon as is practicable’.

However, since then the entire ministerial team has been replaced, leading to speculation the review publication could be delayed even further.

New lord chancellor Liz Truss was also proactive in seeking the reform of employment regulations, which may bode ill for those hoping for concessions from the current administration.