Successes in shaping several pieces of proposed legislation were among Law Society achievements hailed at the inauguration of the body’s 177th president last night.

Addressing an event at Chancery Lane, I. Stephanie Boyce spoke of ‘clear definitive successes’ in preserving the rule of law. ‘Or, in some cases, the prevention of harmful changes.’ Measures amended following Society intervention include: 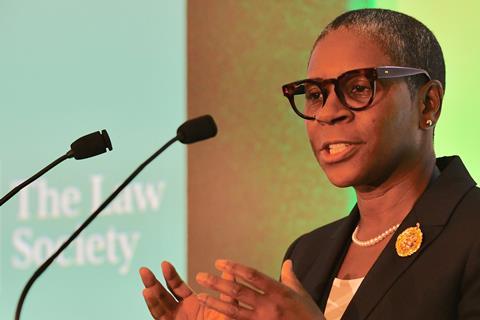 I. Stephanie Boyce spoke of ‘clear definitive successes’ in preserving the rule of law

Meanwhile the Judicial Review and Courts Bill was published ‘without some of the more objectionable proposals from the UK government’s initial consultation on ouster clauses and nullity – a victory for our early engagement with the UK government on this issue’.

Boyce said she was also delighted by the success of the Society’s ‘town hall’ programme, set up to entrench relationships with local societies.

Boyce is the 177th Society president but only the sixth female and the first black office-holder. ‘I am not a passive reaction to changed attitudes and opportunities,’ she said. ‘I have fought to get where I am, and will always fight for diversity, dynamism and equality and social opportunity in the profession.’