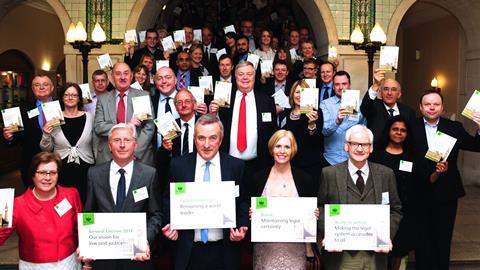 The Law Society has today published its own general election manifesto, calling on the next government to put access to justice at the heart of Brexit Britain.

Regarding Brexit, the Society calls for negotiation of reciprocal rights of practice, audience and legal professional privilege for UK solicitors across the EU and in its courts.

Ensuring the continuance of civil justice cooperation is also a key aspiration.

Society president Robert Bourns said: ‘The legal sector of England and Wales underpins the UK economy - our law enables global commerce so it is vital that however Britain is led after the election, reciprocal arrangements are negotiated so our lawyers can practise law in the EU. Legal services employ and train more than 380,000 people - the sector was worth £25.7bn in 2015 and it’s growing. Every time turnover in the legal sector goes up by £1, it creates £1.39 in the wider economy.’

Bourns added: ’Early legal advice prevents difficult societal and personal situations escalating. So if you’ve a problem with housing, how immeasurably better it is to solve that before you and your family become homeless - which is also likely to cost the taxpayer far more than the initial legal advice.’

The Society also calls on the next government to review the legal aid means test to restore its real value and remove the capital test for those on income benefits. And it reiterates its opposition to an increase in the small claims limit and court fee hikes, stressing that the impact of the latter should be reviewed. Proposals to end the cross-examination of survivors of domestic abuse by their alleged abusers, abandoned when the election was called, should be implemented, it adds.

On human rights, the Society wants to retain the Human Rights Act, but says that if it is replaced by a British Bill of Rights this must protect and enhance rights currently enshrined in UK law.

The Law Society’s manifesto will be launched this afternoon at the Presidents and Secretaries conference, an annual meeting of local law societies from across England and Wales. It can be read in full here.