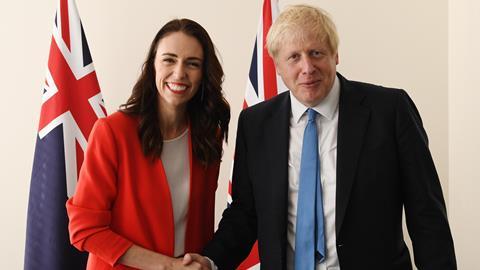 UK lawyers will be able to practise in New Zealand more easily under a new trade deal, the government has said, in another attempt to tap into the Indo-Pacific legal market.

The Department for International Trade said the UK’s free trade agreement (FTA) with New Zealand will improve business travel arrangements and allow professionals such as lawyers and architects to work abroad more easily.

The agreement in principle states that the final deal will contain provisions aimed at driving collaboration between legal regulators to address current barriers to local practice. Authorities will be encouraged to operate ‘efficient and transparent’ routes to the recognition of professional qualifications.

It adds: ‘Legal services provisions within this annex will ensure that UK and New Zealand lawyers can continue to provide legal advisory services related to their respective home jurisdiction, foreign law (not including host jurisdiction), and international law, as well as to provide arbitration, mediation and conciliation services related to international, foreign, or their home jurisdiction law in the other country’s territory without needing to requalify into the local legal profession.’

The Law Society welcomed the agreement, saying it will ‘cement’ the UK’s relationship with New Zealand.

Law Society president I. Stephanie Boyce said: ‘A challenge for trade negotiations is that many barriers to trade in legal services are "behind the border" and are not covered by FTAs. Therefore, it’s vital there is further cooperation to advance seamless cross-border provision of legal services, as indicated in the proposed regulatory dialogue between relevant authorities in the legal sectors of both countries.

‘We hope that the deal’s commitments on market access for services professionals will provide a firm foundation for addressing these issues and look forward to seeing them reflected in the final deal.’

According to the Law Society, the agreement’s proposed chapter on domestic regulation is ‘a first in New Zealand and UK FTA practices’.

In June, the government struck a trade deal with Australia which the Law Society said promises ‘big wins’ for UK legal services, including greater cooperation between regulators, more opportunities for junior lawyers and the confirmation of existing rights.