Aggressive cross-examination is not as effective over video link, while a lack of in-person preparation can damage the performance of legal teams, a study has found.

Research by international consultancy Berkley Research Group (BRG) says that virtual hearings have been ‘largely positive’ and have often exceeded the expectations of those involved. However, expert witnesses have reported that traditional cross-examination techniques are ‘significantly less effective’ in a remote setting than in a traditional courtroom.

'Ultimately, you’re looking at a picture on a screen, so a lawyer could be as aggressive as they wanted during cross examination and it’s easier for me to stick with my answer,' said Henry Miller, an expert witness and managing director at BRG.

Counsel and judges are also affected by the layout of faces on screen, the global study found. ‘If proceedings are conducted with multiple people sharing the same camera, such as cases involving a bench, or if the expert witness is sitting back from the lens, this can negatively impact proceedings. This hinders the ability of the opposing counsel and decision makers to judge the reaction of expert witnesses to questioning and form a sense of the room.’ 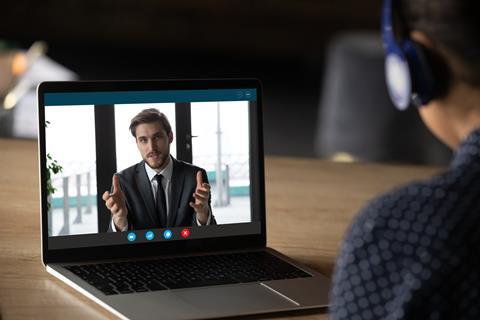 Techniques used by lawyers are less effective over video link, according to research

Allen & Overy partner Anna Masser warned against too may faces on screen at one time. ‘If you’re not certain whom you have to convince, how do you engage properly?’ she said. A lack of in-person preparation before entering proceedings was also cited as a major drawback of remote hearings.

On the whole, however, virtual hearing were well received by the lawyers and expert witnesses interviewed, and the outcomes of proceedings were widely thought to have been the same as if they had taken place in person under normal circumstances. In contrast, hybrid hearings – in which some participants are physically present and others dial-in – have proved unpopular.

The report was based on the views of six of BRG’s international expert witnesses, together with an arbitrator based in Hong Kong, a Russian lawyer specialising in the psychology of dispute resolution and Massey, head of A&O’s international arbitration practice in Germany.

In May, professional bodies across the British Isles claimed that remote hearings deliver a ‘markedly inferior experience’ and degrade human interaction. In a joint statement, the Bar Councils of England and Wales, Northern Ireland, and Ireland, together with Scotland’s Faculty of Advocates, said that virtual hearings have ‘multiple and multi-faceted disadvantages’ compared with in-person proceedings, including less satisfactory interaction with judges.