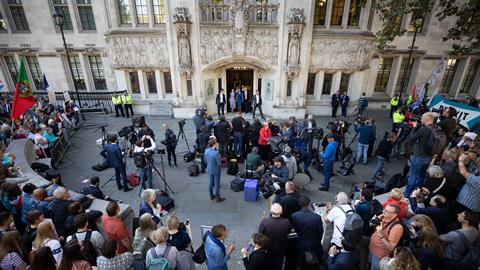 National media commentators shifted their gaze from the Palace of Westminster to the opposite western side of Parliament Square yesterday as the Supreme Court began hearing the appeal in two joined cases concerning the prorogation in parliament.

Today's tabloids divide on predictable lines. Calling on judges to ’conjure the wisdom of Solomon to resolve competing legal claims’, the Mirror helps them along by declaring: ’It’s clear that serial liar Boris Johnson wasn’t honest about suspending parliament or his kamikaze Brexit threat.’

Under the headline ’A pointless diversion on the road to Brexit’, the Mail opines that: ’This pointless legal theatre is shredding what remains of this country’s reputation for the sober and mature conduct of public affairs.’

The Telegraph’s political editor, Gordon Rayner notes that the case raises the wider issue of whether courts should interfere in politics, and if judges have already overstepped the mark.

In his weekly Times column, Conservative peer Daniel Finkelstein expands on the constitutional implications, describing Miller v The Prime Minister as ‘a test case for the way we are governed’. The hearings ’may mark the moment Britain stopped being a political democracy restrained by law and became instead a legal democracy tempered by politics.’

Several sketchwriters find material in the participants. The Guardian’s John Grace concludes that it was a poor day for nominative determinism: Lord Pannick QC, for Gina Miller, had been the 'epitome of calm', while Lord Keen QC, for the Scottish government, ’appeared almost comatose’. French daily Libération's correspondent meanwhile appears disappointed that the judges and advocats sported neither wigs nor ermine gowns, appearing rather in 'somewhat monotonous shades of grey'.

Finally, in the best tradition of regional newspapers, the Yorkshire Post seizes on a local angle. Its headline: ’Yorkshire-born Supreme Court president Lady Hale presides over vital hearing on whether suspending parliament was unlawful.’