Black men are negatively stereotyped due to the disproportionate number of people from ethnic minorities throughout the criminal justice system, a landmark commission has told the prime minister.

The report of the Commission on Race and Ethnic Disparities, published today, says people from ethnic minorities are over-represented at many points of the criminal justice system. Black people are usually the most overrepresented.

Black people were arrested at a rate over three times higher than white people in the year ending March 2020. People in Asian and other minority ethnic groups had the highest custody rates in 2018. The percentage of the prison population from ethnic minorities was almost twice the ethnic minority percentage in the population, with black people and people in mixed ethnic groups disproportionately represented.

The report states: ‘There are many reasons for the disproportionate numbers of ethnic minority people involved in violent crime as both victims and perpetrators, but the disparity casts a significant shadow over black life, and also contributes to negative stereotypes of young black men. Nevertheless, it is important to remember this context when we address the complex issue of stop and search.’ 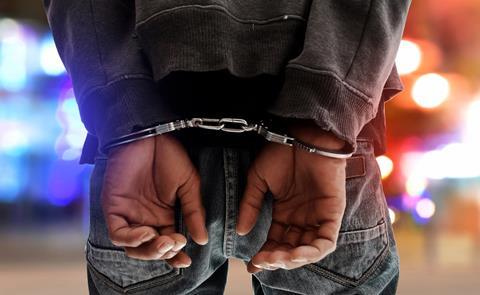 There were 563,837 stop and searches in England and Wales in the year ending March 2020. Rates were highest for black Caribbean and black African people. In almost every police force area, Black people had the highest recorded stop and search rate.

The report calls for a strategy to be developed to improve the efficacy and implementation of stop and search.

Commenting on the report, legal thinktank Justice said it was disappointed by the commission's 'misplaced optimism' about the state of racism in the UK.

Director Andrea Coomber highlighted Justice's recent report on racial disparity in the youth justice system, which identified that children from ethnic minorities - who make up 18% of the 10-17-year-old population yet 52% of those in custody - languish under years of systemic racism and poor treatment from various criminal justice agencies.

Justice welcomed the commission's recommendations on increasing police accountability during stop and search. 'However, with many of the Lammy Review’s recommendations still unimplemented, much more needs to be done. Justice urges the government to look beyond this report and recognise the entrenched injustices that these communities face. They deserve better, and it is the responsibility of the system to change,' Coomber said.

Today’s report also looks at disparities within the legal profession.